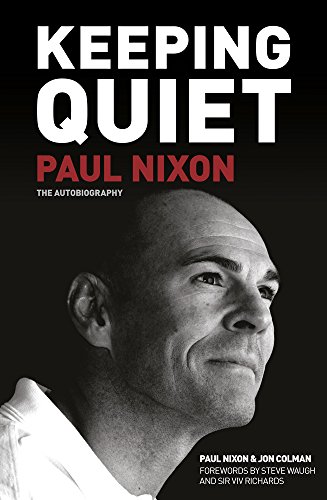 Paul 'mad as a badger' Nixon is one of cricket's most distinctive figures, a wicketkeeper known as much for his manic words and deeds as a trophy-laden career which spanned four decades. But behind the bullishness, England and Leicestershire's most notorious 'sledger' was battling strange mental demons both on and off the field. In "Keeping Quiet" the Cumbrian farmer's son reveals the nature of his psychological torment and how his career finally took off after conquering dyslexia. He offers a candid insight into the events that shaped his life, including family tragedy, turbulent England tours, a controversial World Cup, turmoil at his county, his sensational swansong, sledging tales aplenty - as well as revelations about match-fixing.

Book of the Month September 2012 - 'Written in uniquely pacey and conversational style, as you move through this volume (and you will do, quickly) it s Nixon s voice you hear: positive, to-the-point, impassioned; whether justifying his on-field verbals, recalling playing successes or describing his mental state during certain periods of his career (or, sometimes, simply at the time of writing). A book befitting the man; whilst an abrasive competitor and occasionally eccentric character, Nixon will ultimately be remembered as Waugh describes him: A bloody good cricketer and a great bloke.' --All Out Cricket Magazine

'Entertaining, funny, unique and full of banter, this book is a must read' --The Middle Stump Blog

Paul Nixon is a high-profile domestic and international cricket star who has played for Kent, Leicestershire, and England. Jon Colman is a multi-award-winning sports writer with Cumbrian Newspapers. He is a fanatical England cricket fan and has followed the team and Paul Nixon's career closely over the years.

Book Description The History Press Ltd, United Kingdom, 2012. Hardback. Condition: New. Language: English. Brand new Book. From Gower to Flintoff, Waugh to Vaughan, Cronje to Pietersen, Paul Nixon has shared a dressing room with some of the most evocative names in international and domestic cricket - and often enraged them on the field of play. The wicketkeeper, known as his sport's most prolific `sledger', has amassed more than 20 years of stories from his career at the heart of the game and now reveals them in typically outspoken style. From `Fredalo' to match-fixing, Nixon has experienced some of the most notorious episodes in cricket history, possesses strident opinions on the game and has a track record of success in the English first-class game and the Twenty20 revolution. With an accent on off-the-field anecdotes, Nixon also lays bare the personality that led the Australian legend Steve Waugh to compare him to: `a mosquito buzzing around in the night, that needs to be swatted but always escapes.'. Seller Inventory # AA79780752476469