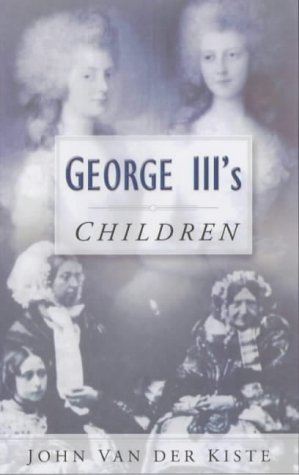 On 12 August 1762, Queen Charlotte gave birth to her first child. Twenty-one years later, to the week, the 15th and youngest was born. All but two children survived to maturity. The eldest of King George III's children, who became Prince Regent and King George IV, is less remembered for his patronage of the arts than for his extravagance, and maltreatment of his wife Caroline. As Commander-in-Chief to the British army, the administrative qualities of Frederick, Duke of York are largely forgotten, while King William IV, usually dismissed as a figure of fun, brought a new affability to the monarchy which helped him through the storms engendered during the passage of the Great Reform Bill in 1832. The princesses, for many years victims of their parents' possessiveness, married late in life, if at all, and are passed off as non-entities. This objective portrayal of the royal family draws upon contemporary sources to lay to rest the gossip and exaggeration.

John Van der Kiste has written many books on Royal History for Sutton, including The Romanovs, George V's Children and Princess Victoria Melita. He lives in Devon and has recently got engaged.

Book Description The History Press, 2004. Paperback. Condition: Used; Good. Dispatched, from the UK, within 48 hours of ordering. This book is in good condition but will show signs of previous ownership. Please expect some creasing to the spine and/or minor damage to the cover. Seller Inventory # CHL6001819

Book Description The History Press, 2004. Paperback. Condition: Very Good. All orders are dispatched the following working day from our UK warehouse. Established in 2004, we have over 500,000 books in stock. No quibble refund if not completely satisfied. Seller Inventory # mon0005113477

Book Description -. Paperback. Condition: Very Good. George III's Children This book is in very good condition and will be shipped within 24 hours of ordering. The cover may have some limited signs of wear but the pages are clean, intact and the spine remains undamaged. This book has clearly been well maintained and looked after thus far. Money back guarantee if you are not satisfied. See all our books here, order more than 1 book and get discounted shipping. Seller Inventory # 7719-9780750934381

Book Description The History Press Ltd, 2004. Paperback. Condition: Used; Good. **Simply Brit** Shipped with Premium postal service within 24 hours from the UK with impressive delivery time. We have dispatched from our book depository; items of good condition to over ten million satisfied customers worldwide. We are committed to providing you with reliable and efficient service at all times. Seller Inventory # mon0001757204

Book Description The History Press Ltd, 2004. Paperback. Condition: Used; Good. **SHIPPED FROM UK** We believe you will be completely satisfied with our quick and reliable service. All orders are dispatched as swiftly as possible! Buy with confidence! Aloysius Ihezie. Seller Inventory # mon0002306916

Book Description Paperback. Condition: Very Good. The book has been read, but is in excellent condition. Pages are intact and not marred by notes or highlighting. The spine remains undamaged. Seller Inventory # GOR001988831