Items related to Engines and Enterprise: The Life and Work of Sir Harry...

Reynolds, John Engines and Enterprise: The Life and Work of Sir Harry Ricardo

Engines and Enterprise: The Life and Work of Sir Harry Ricardo 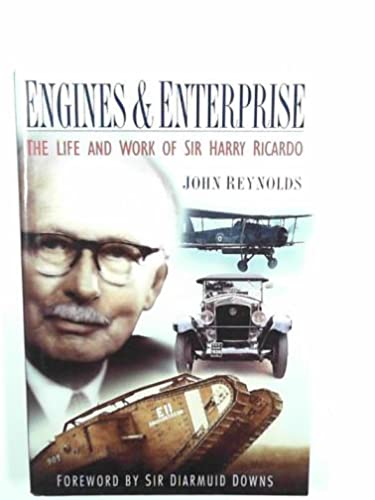 This illustrated biography reveals how Sir Harry Ricardo found his place, along with Sir Henry Royce and Frederick Lanchester, in the ranks of the British engineers and designers whose work had a profound international influence on the development of the internal-combustion engine. His achievements as an engineer, scientist and inventor were repeatedly honoured throughout the automobile and aircraft industries during his lifetime. Beginning with an account of Sir Harry's family background and education at Rugby and Cambridge, the book traces his life through six decades. This period witnessed great changes in the social and industrial fabric of Great Britain, brought about the the arrival of the motorcars and aeroplanes he championed so enthusiastically. During that time, as a consultant engineer, he played a vital role in bringing about British victory in two world wars and made a major contribution towards the development of the internal-combustion engine for both automobile and aircraft use. Sir Harry always preferred the role of independent consultant and his name was never directly connected with any specific make of car or aeroplane. Nonetheless, his efforts behind the scenes for companies including Rolls-Royce, Vauxhall, Bentley, Bristol, Napier, Citroen and Fiat led to many advances in the performance and reliability of military and civilian engines during the inter-war years.

John Reynolds is a well-respected motoring journalist, author and historian who has written for numerous magazines and newspapers. His books include Haynes's Andre Citroen: Engineer, Explorer, Entrepreneur and Citroen 2CV. He lives near Lutterworth, Leicestershire.

1. Engines and Enterprise: The Life and Work of Sir Harry Ricardo