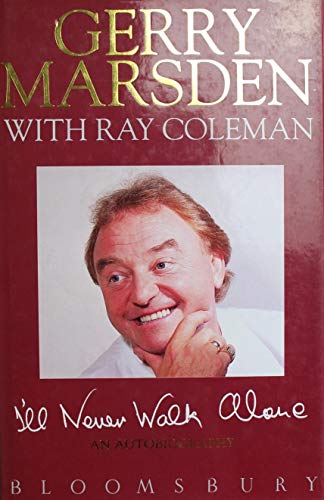 Thirty years ago, in 1963, Gerry and the Pacemakers made pop-music history. Their first three singles, "How Do You Do It?", "I Like It" and "You'll Never Walk Alone", went to the top of the UK charts, creating a still-unbeaten record. For twenty-year-old Gerry Marsden it was the start of a long and colourful show-business career. A pioneer of the Liverpool pop explosion that reverberated around the world, he vowed to broaden his horizons and stay on stage for the rest of his life. Today he is more active and in even greater international demand as a performer than ever. Brought up in the tough Dingle district of Liverpool, Marsden was a street fighter and enthusiastic boxer, who left school at the age of fifteen to work as a railways delivery boy. Like thousands of teenagers in the 1950s he got the music bug, taught himself guitar, formed a group and joined the vibrant club circuit alongside the Beatles and hundreds of other young rock 'n' rollers. In 1962 Gerry and the Pacemakers were signed by manager Brian Epstein as his second group after the Beatles, and made their name with ballads like "Ferry Cross the Mersey" and "Don't Let the Sun Catch You Crying" as well as raunchy pop. But it was a Rodgers & Hammerstein song, "You'll Never Walk Alone", which had enthralled Marsden since he saw the film "Carousel" in his youth, that was their biggest hit. For three decades it has remained the anthem of the crowds at Liverpool Football Club, played before kick-off every Saturday, inscribed on the club gates and always the most popular concert request. In this autobiography Gerry Marsden emerges as a driven man, an artist with enormous confidence and a unique spirit. From his streetwise boyhood and early love of music to his friendship - and keen rivalry - with the Beatles, hunger for fame and hard-won success, his story is one of grit, warmth, humour and determination.