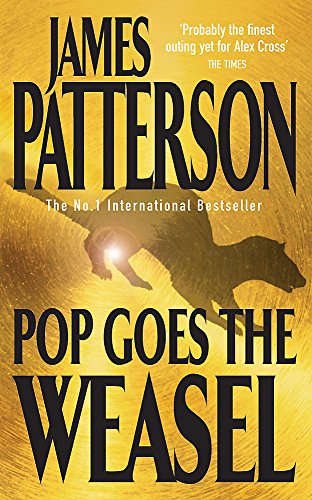 In POP GOES THE WEASEL, James Patterson has created a formidable villain every reader will see in the shadows when the lights are out, a tender love story, a plot powered by relentless suspense and psychological thrills kicked up to an all-time high.

'It's all just a game, darling. I play with three other men. Their names are FAMINE, WAR and CONQUEROR. My name is DEATH. You're a very lucky girl - I'm the best player of all.'

Geoffrey Shafter: a man who never loses, he is prepared to play the game of games for the highest stakes of all.

Alex Cross: senior Washington, DC homicide detective, he is determined, whatever the consequences, to unmask the man he has nicknamed the weasel, the prime suspect for a spate of killings that Cross has been forbidden to investigate.

Likened to a "young Muhammad Ali", Alex Cross, the Porsche-driving profiler, doctor, detective and father of two has seen his fair share of vicious killers. From a bloodthirsty butcher who came after his family (Cat and Mouse) to a devilish duo working cross-country (Kiss the Girls), Cross has managed to out-manoeuvre all of his enemies. Until he meets the Weasel.

A series of killings in the forgotten, crime-infested ghettos of southeastern DC has sent Cross and his 6'9" 250-pound-partner, John Sampson in search of the "Jane Doe" killer. However, their racist, tyrannical boss George Pitman orders them to stay out of the southeast and investigate the high-profile murder of a wealthy white man. Cross already has suspicions that the murders are linked, but when Sampson's ex turns up in an abandoned southeast warehouse kicked to death, the two detectives carry on with their original investigation.

Meanwhile, Cross's long-time love, Christine, (Cat and Mouse) has taken prominence in his life and it looks as if the two will finally get hitched--with one hitch: Cross leaves the force. Although Cross's instinct tells him to quit--to not put everything he loves in jeopardy again--he's compelled to catch the Weasel. Akin to a slick, Hollywood action flick, Pop Goes the Weasel doesn't have time for meaningful character development and thoughtful moral analysis. And it doesn't need to. Its winning formula is based in short scenes (chapters average about three pages), addictive plot progression and mean dialogue:

"Sampson sighed and said, "I think her tongue is stapled inside the other girl. I'm pretty sure that's it, Alex. The Weasel stapled them together." I looked at the two girls and shook my head. "I don't think so. A staple, even a surgical one, would come apart on the tongue's surface... Crazy glue would work."

This review refers to the hardback edition of this title. --Rebekah Warren Review:

Cross, a brilliant homicide cop, is one of the great creations of thriller fiction (Dallas Morning News)

Brilliantly terrifying... so exciting I had to stay up all night to finish it (Daily Mail)

A fine writer with a good ear for dialogue and pacing. His books are always page turners (Washington Times)

Terror and suspense that grab the reader and won't let go. Just try running away from this one (Ed McBain)

A master of the suspense genre (SUNDAY TELEGRAPH)