Items related to Night in the Lonesome October: Heartbreak leads to...

Night in the Lonesome October: Heartbreak leads to a sinister after-dark journey 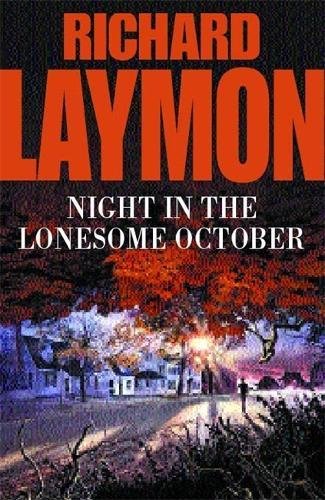 Ed Logan is 20 years old and a sophomore at Willmington University. He's also been dumped by his girlfriend. Lonesome and broken-hearted, he decides to go for an aimless late-night walk. He doesn't know where he's headed. He doesn't know what he's going to do when he gets there. And he has absolutely no idea of the strange people he is about to meet. Like Casey, the athletic blonde who roams the streets as if she's on a mission. And then there's Randy, who's definitely on a mission - to make Ed's life hell. And then there's the others. Not exactly people. And very definitely not friendly. If Ed's not careful, he's not going to make it home at all...

Night in the Lonesome October is the first book published since the death of author Richard Laymon, and it is ironic that this is among his richest and most atmospheric pieces.

Laymon's hero Ed Logan is brimming with anticipation for his second year at Willmington University. He's been missing Holly, who he fell in love with the previous year. But when Ed returns to campus, Holly doesn't. He receives a letter which destroys his hopes--she has fallen in love with another man, and won't be coming back. Virtually destroyed by the news, Ed struggles to study and even to sleep. Leaving his apartment one night for a walk, he finds that he has moved into what might almost be a different world: there are others out on the streets--are they human, these figures who hide in the shadows? Certainly, the prey they seek is marked for a grisly end. Needless to say, Ed becomes involved with these sinister figures, particularly a mystery girl who will change his life.

The fashion in which Laymon insinuates these otherworldly elements into the otherwise normal world of his hero is brilliantly done, with Ed's distraught emotional state seeming to act as a catalyst. In all the best horror tales, the hero is not just menaced by nameless evil, but becomes inextricably involved with it. That is certainly the case here, and the attention paid to his central character is just as rewarding as the horror set pieces:

I swept the beam a small distance to the left. Near the far end of its reach, it dimly illuminated a low, squatting circle of men. Hairy, filthy, bloody. All of them looking at us. Chewing. Blood spilling from their mouths...

DREADFUL TALES:
'DREADFUL TALES knocks all other offerings for six and presents a consistent collection of tales, almost every one of which manages to shock, delight and horrify through numerous ideas, characters and situations... a breath of fresh air in the stale UK Horror climate... Gets my vote as the best of 2000 by a long chalk' Shivers

'This is an author that does not pull his punches... A gripping, and at times genuinely shocking, read' SFX Magazine

'Dean Koontz and Stephen King normally dominate this territory. They had better watch out, Laymon is already staking a claim' Northern Echo

TRAVELLING VAMPIRE SHOW:
'If you are not already well acquainted with Richard Laymon, get to know him now. This is an enticing tale of three youngsters in a small American town' Manchester Evening News

'This gloriously inventive piece is probably Laymon's best book yet: dipping into the poetic vein of Ray Bradbury was clearly a vitalising exercise for him, and this is sheerly enjoyable... The prose here is rich and inventive, the atmosphere and scene-setting handled with real aplomb. Whatever you make of Laymon's earlier books, this is one you should try' News International Lineone

'Set in a sleepy American town in the summer of 1963, this rites of passage novel recreates the long, stifling days - and nights filled with possibilities - that distinguish the teenage years' Belfast Telegraph

PRAISE FOR PREVIOUS BOOKS:
'No one writes like Laymon and you're going to have a good time with anything he writes' Dean Koontz
'This author knows how to sock it to the reader' The Times,
If you've missed Laymon you've missed a treat' Stephen King,
'A brilliant writer' Sunday Express·
'AMONG THE MISSING is strikingly different. From the chilling opening...we are plunged into a disturbing world of twisted psychopathology' The Times
'In Laymon's books, blood doesn't so much drip drip as explode, splatter and coagulate' Independent
'Stephen King without a conscience' Dan Marlowe
'A gut-crunching writer' Time Out
'An uncanny grasp of just what makes characters work...readers turn the pages so fast they leave burn marks on the paper' Horrorstruck
'Incapable of writing a disappointing book' New York Review of Science Fiction
'One of the best and most reliable writers working today' Afraid
'Laymon's biggest strength is that he is able to provide lighthearted fun and disturb at the same time' Fear
'He's got a knack for creating characters you care about' Cemetery Dance
'There's not a crime novelist around who writes cleaner prose than Laymon - and few who can jack up the tension the way he does...Laymon likes to grasp readers by the neck with expert word-smithery, then haul them into a diabolical situation...once again, Laymon offers unexpected, well-rounded characters blown about in a narrative that moves like the wind.' Publishers Weekly
'A grisly cocktail of horror, murder and mayhem laced with Laymon's distinct blend of black humour. Great stuff.' Yorkshire Evening Press
'Richard Laymon doesn't disappoint with his latest offering.' Peterborough Evening Telegraph
''So fastpaced you find yourself reading it at the speed of a bullet from a gun...a rollercoaster ride of fear' Peterborough Evening Telegraph

1. Night in the Lonesome October: Heartbreak leads to a sinister after-dark journey

Book Description Feature, 2001. Hardcover. Condition: Good. Ex Library Book with usual stamps and stickers. Darkened tan to the page edges. Good condition is defined as: a copy that has been read but remains in clean condition. All of the pages are intact and the cover is intact and the spine may show signs of wear. The book may have minor markings which are not specifically mentioned. Most items will be dispatched the same or the next working day. Seller Inventory # mon0013432417

Book Description Headline, London, 2001. Hardback. Condition: VG+. Dust Jacket Condition: Fine. Steve Crisp (illustrator). First UK Edition. binding fault caused the corner of the front free endpaper to be stuck to the front pastedown which I had to cut to free the endpaper so the endpaper has a small corner piece missing. Hardcover. Seller Inventory # 041449

3. Night in the Lonesome October: Heartbreak leads to a sinister after-dark journey