Items related to The Hidden Famine: Hunger, Poverty and Sectarianism... 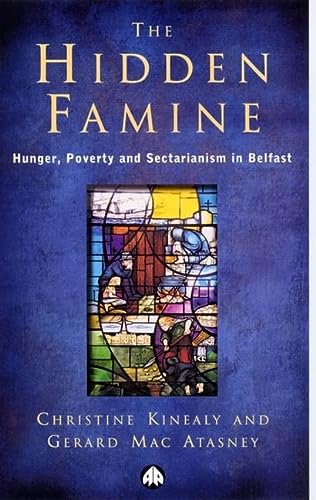 Between 1845 and 1852 Ireland was devastated by the 'Great Hunger' - the most severe famine in modern European history. The view widely held by historians is that the impact of the Famine on the northern province of Ulster, in particular the largely Protestant city of Belfast, was minimal. In the first book on the Famine to focus specifically on Belfast, Christine Kinealy, one of Ireland's leading historians of the period, and Gerard MacAtasney, challenge this view and offer a new interpretation. Drawing on a wealth of original research, Kinealy and MacAtasney begin with an examination of society and social behaviour in Belfast prior to 1845. They then assess the official response to the crisis by the British government, the response by the Church in both England and Ireland, and the part played by the local administration in Ulster. The authors examine the impact of the cholera epidemic on Belfast in 1849-50, the city's recovery after the Famine, and the beginnings of open sectarianism among the business and landed classes of the province.

"[Kinealy is] one of the outstanding historians of modern Ireland." -- Irish Democrat

'[Kinealy is] one of the outstanding historians of modern Ireland.' --Irish Democrat

‘[Kinealy is] one of the outstanding historians of modern Ireland.’ --Irish Democrat

Dr Christine Kinealy teaches history at the University of Central Lancashire and has also taught at the University of Liverpool and universities in Dublin and Belfast. She is the author of The Great Calamity: The Irish Famine, 1845-52 (Roberts Reinhart, 1994) and has written for History Ireland and the New York-based Irish Echo.

2. The Hidden Famine: Hunger, Poverty and Sectarianism in Belfast 1840-50

3. The Hidden Famine: Hunger, Poverty and Sectarianism in Belfast 1840-50

5. The Hidden Famine: Hunger, Poverty and Sectarianism in Belfast 1840-50