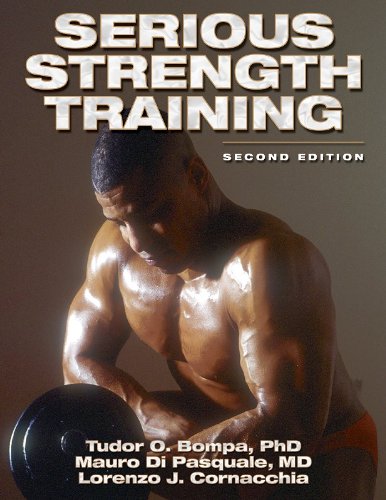 This new edition aims to retain all the elements of the first edition's scientifically based method for achieving the ultimate physique, as well as building on them with the addition of new information on nutrition and new exercises. Tudor Bompa expands on his periodized approach to strength training to include periodization of nutrition. Readers can match nutrition guidelines to each of the six training phases, maximizing their strength and muscle definition. In addition, Mauro Di Pasquale, an internationally renowned physician and body-building nutrition expert, presents his revolutionary diet. His method allows readers to structure their diets to meet their individual metabolic profiles.

""With science as the backbone and loaded with in-depth practical advice, "Serious Strength Training" provides a carefully constructed step-by-step approach. This is a good addition to the library of bodybuilders of all levels." Muscle & Fitness, August 1998 "In their book, "Serious Strength Training," the authors outline a workout routine that takes into consideration family obligations and hectic holiday seasons. It's about time! You will find programs for entry-level, recreational, and advanced strength trainers and bodybuilders. This book is excellent." MA Training, March 1999 "Serious Strength Training "gives us the ultimate advice because authors Di Pasquale and Bompa are the world's most recognized authorities on nutrition and training."" Robert Kennedy Publisher, MuscleMag International, Oxygen, and American Health & Fitness Serious Strength Training "brings science into the gym. Hone your workouts with the most effective, efficient exercises and get the gains you deserve for your sweat and effort." Steve Holman Editor in chief, Ironman magazine "From the Journal of Sports and Sports Sciences" A book which should be in possession of all coaches and trainers as well as the libraries around the world.

Tudor O. Bompa, PhD, revolutionized Western training methods when he introduced his groundbreaking theory of periodization in Romania in 1963. After adopting his training system, the Eastern Bloc countries dominated international sports through the 1970s and 1980s. In 1988, Dr. Bompa applied his principle of periodization to the sport of bodybuilding. He has personally trained 11 Olympic Games medalists (including four gold medalists) and has served as a consultant to coaches and athletes worldwide. Dr. Bompa's books on training methods, including Theory and Methodology of Training: The Key to Athletic Performance and Periodization of Training for Sports, have been translated into 17 languages and used in more than 130 countries for training athletes and educating and certifying coaches. Bompa has been invited to speak about training in more than 30 countries and has been awarded certificates of honor and appreciation from such prestigious organizations as the Argentinean Ministry of Culture, the Australian Sports Council, the Spanish Olympic Committee, and the International Olympic Committee. A member of the Canadian Olympic Association and the Romanian National Council of Sports, Dr. Bompa is professor emeritus at York University, where he has taught training theories for 25 years. He and his wife, Tamara, live in Sharon, Ontario. Mauro Di Pasquale, MD, a physician specializing in nutrition and sports medicine, spent 10 years at the University of Toronto teaching and researching nutritional supplements and drug use in sports. He wrote both Bodybuilding Supplement Review and Amino Acids and Proteins for the Athlete and has written hundreds of articles for Muscle and Fitness, Flex, Men's Fitness, Shape, Muscle Media, and Ironman, among many others. Pasquale was a powerlifter for over 20 years, winning the powerlifting world championships in 1976 and the World Games in 1981. Di Pasquale received his medical degree from the University of Toronto and is a certified medical review officer. Currently the president of the International United Powerlifting Federation and the Pan American Powerlifting Federation, he lives in Ontario, Canada. As a former bodybuilder, former professional wrestler for the National Wrestling Alliance (NWA), and a kinesiologist, Lorenzo J. Cornacchia has conducted extensive electromyography (EMG) research to identify which exercises cause the greatest muscle stimulation and which could potentially cause harm. The Periodized Program that developed out of his research helped professional bodybuilder, Laura Binetti, win the World's Championship in Detroit, Michigan and go on to receive her highest ranking title ever in Ms.Olympia. Cornacchia is presently a contributing editor and author for Ironman magazine. Cornacchia received his B.A in Physical Education and Health from York University. A member of the Association of Kinesiologists of Canada, he presently resides in Oak Ridges, Ontario.

Book Description Condition: New. Brand New Original US Edition.We Ship to PO BOX Address also. EXPEDITED shipping option also available for faster delivery.This item may ship fro the US or other locations in India depending on your location and availability. Seller Inventory # AUDUU-20714

Book Description Human Kinetics, 2002. Paperback. Condition: New. 100% buyer satisfaction guarantee. *Some of our items are sealed to protect them during shipping and to maintain their listed condition* International orders over 2lbs may be subject to shipping price adjustments. Seller Inventory # mon0000089000