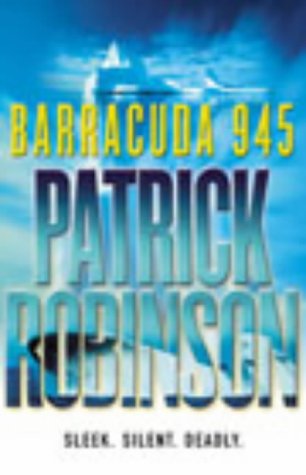 He was one of the world's most skilful submariners. Trained by the best in the business - the Royal Navy - and now at the peak of his powers and skill, he finally comes into his own. Because for years, he has been a sleeper for the enemies of the West. He has been given his orders and will carry them out with brutal efficiency, or die in the attempt. His target? The oil-supply lines that carry America's life blood from the frozen wastes of Alaska to the power-hungry refineries of America's West Coast. His weapon? A lethal submarine - Barracuda 945 - that he hijacks before setting off in search of the pipelines he will destroy. And the Barracuda, like the shark it is named after, is swift, silent and deadly. Who can stop him? Only the Special Forces and the submariners of the West's navies, but only if they can trace him in the first place and eliminate him before he destroys the oil supply routes. Barracuda 945 is Patrick Robinson's sixth breathtaking thriller. Terrorism rears its death-dealing head in a way that has become all too real since the events of September 11th 2001.

With Barracuda 945 Patrick Robinson takes many of the testosterone-fuelled certainties of the modern military thriller and turns them vehemently on their heads. Confronted with a massacre of Palestinian civilians by the sorely provoked Israeli troops he is advising (but who will not listen to him) SAS commander Ray Kerman rediscovers his long-lost Islamic roots, turns on his own men and defects, for good.

What follows is a disaster--not for the world of Islamic fundamentalism into which he slips as neatly as a shark into a welcoming ocean but for the West which trained him. Robinson proceeds to demonstrate how a properly trained commander trusted by the Iranian ayatollahs and their terrorist proxies could do damage so much more severe than 9/11 that it takes the breath away.

This feels like the first of a sequence--Ray Kerman becomes Ravi Rashood, finds true love and works mischief while half a world away a CIA analyst puts the story together and plans some eventual come-uppance. This is an interesting thriller because Robinson has some real political agendas, however reactionary they may be, and because he has a certain sense of how things work. --Roz Kaveney

‘Watch out for Robinson. He is in the same league as Clancy’ -- Birmingham Post