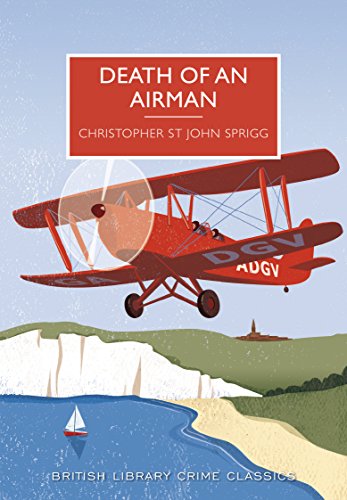 Death of an Airman is an enjoyable and unorthodox whodunit from a writer whose short life was as remarkable as that of any of his fictional creations. When an aeroplane crashes, and its pilot is killed, Edwin Marriott, the Bishop of Cootamundra in Australia, is on hand. In England on leave, the Bishop has decided to learn how to fly, but he is not convinced that the pilot's death was accidental. In due course, naturally, he is proved right. The Bishop and Inspector Bray of Scotland Yard make an appealing pair of detectives, and ultimately a cunning criminal scheme is uncovered.

An exemplar of what the Golden Age did so well. --The Invisible Event blog

Christopher St John Sprigg was born in Putney in 1907, but left school at 15 after his father lost his job as literary editor of the Daily Express. Christopher started working for a local newspaper. Interested in aviation and writing, he catered for both passions by becoming involved with an aeronautics publishing business, and in 1930 he published The Airship: its Design, History, Operation and Future. This was followed two years later by a book titled Fly with Me: an elementary textbook on the art of piloting, and later by Let's Learn to Fly.

Book Description Paperback. Condition: Good. A few small marks or stains to the page edges/pages . Ex library copy with usual stamps & stickers Good condition is defined as: a copy that has been read but remains in clean condition. All of the pages are intact and the cover is intact and the spine may show signs of wear. The book may have minor markings which are not specifically mentioned. Most items will be dispatched the same or the next working day. Seller Inventory # wbb0018547693

Book Description Paperback. Condition: Very Good. The book has been read, but is in excellent condition. Pages are intact and not marred by notes or highlighting. The spine remains undamaged. Seller Inventory # GOR006668980

Book Description Condition: Good. Ships from the UK. Former library book; may include library markings. Used book that is in clean, average condition without any missing pages. Seller Inventory # GRP85898785

Book Description Paperback. Condition: Used; Good. **SHIPPED FROM UK** We believe you will be completely satisfied with our quick and reliable service. All orders are dispatched as swiftly as possible! Buy with confidence! Greener Books. Seller Inventory # 2128500

Book Description Paperback. Condition: Used; Good. **Simply Brit** Shipped with Premium postal service within 24 hours from the UK with impressive delivery time. We have dispatched from our book depository; items of good condition to over ten million satisfied customers worldwide. We are committed to providing you with reliable and efficient service at all times. Seller Inventory # 1769649

Death of an Airman

Book Description Condition: Good. A+ Customer service! Satisfaction Guaranteed! Book is in Used-Good condition. Pages and cover are clean and intact. Used items may not include supplementary materials such as CDs or access codes. May show signs of minor shelf wear and contain limited notes and highlighting. Seller Inventory # 0712356150-2-4

Book Description A near Fine copy of this classic, with a new introduction by Martin edwards. first thus. Seller Inventory # 8956