Items related to The Language of Psychoanalysis (International PsychoAnalysis... 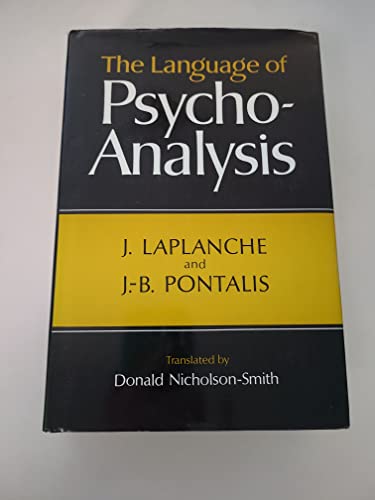 Sigmund Freud evolved his theories throughout his lifetime. This entailed many revisions and changes which he himself never tried to standardize rigidly into a definitive conceptual system. The need for some sort of a reliable guide which would spell out both the pattern of the evolution of Freud's thinking, as well as establish its inherent logic, was felt for a long time by both scholars and students of psychoanalysis. Drs. Laplanche and Pontalis of the Association Psychoanalytique de France succeeded admirably in providing a dictionary of Freud's concepts which is more than a compilation of mere definitions. After many years of creative and industrious research, they were able to give an authentic account of the evolution of each concept with pertinent supporting texts from Freud's own writing (in the Standard Edition translation), and thus have endowed us with an instrument for work and research which is characterized by its thoroughness, exactitude and lack of prejudice towards dogma. The Language of Psychoanalysis has already established itself as a classic and will long continue to be of invaluable use to both student and research-worker in psychoanalysis.

Jean Laplanche (1924 - 2012) was described by the journal 'Radical Philosophy' as "the most original and philosophically informed psychoanalytic theorist of his day." Studying philosophy under Hyppolite, Bachelard, and Merleau-Ponty, he became an active member of the French Resistance under the Vichy regime. Under the influence (and treatment) of Jacques Lacan, Laplanche came to earn a doctorate in medicine and was certified as a psychoanalyst. He eventually broke ties with Lacan and began regularly publishing influential contributions to psychoanalytic theory, his first volume appearing in 1961. In 1967 he published, with his colleague J.-B. Pontalis, the celebrated encyclopaedia 'The Language of Psychoanalysis'. A member of the International Psychoanalytical Association, co-founder of the Association Psychanalytique de France, emeritus professor and founder of the Center for Psychoanalytic Research at the Universite de Paris VII, and assistant professor at the Sorbonne, he also oversaw, as scientific director, the translation of Freud's complete oeuvre into French for the Presses Universitaires de France.

2. The language of psycho-analysis, (The International psycho-analytical Library No. 94))

3. The Language of Psychoanalysis. Hogarth Press. 1980.

Book Description Hogarth Press, 1980. Hardcover. Condition: Good. Item may show signs of shelf wear. Pages may include limited notes and highlighting. May include supplemental or companion materials if applicable. Access codes may or may not work. Connecting readers since 1972. Customer service is our top priority. Seller Inventory # mon0000862751

Book Description Hardback. Condition: Very Good. The book has been read, but is in excellent condition. Pages are intact and not marred by notes or highlighting. The spine remains undamaged. Seller Inventory # GOR005938513

6. The Language of Psycho-Analysis

7. The Language of Psychoanalysis