Items related to "e", The Story of a Number 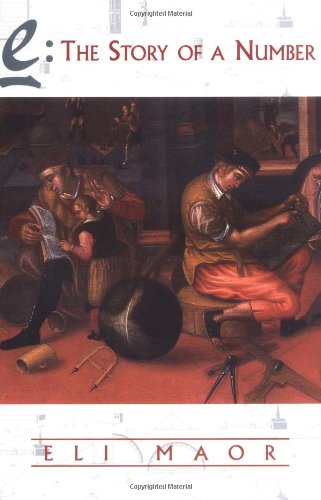 e: The Story of a Number begins by describing the transition in mathematics brought about by the introduction of the microchip. Until about 1975, logarithms were every scientist's best friend. They were the basis of the slide rule that was the totemic wand of the trade and were listed in the huge books that were consulted in every library. Then handheld calculators arrived, and within a few years slide rules were museum pieces.

But e remains, the centre of the natural logarithmic function and of calculus. Eli Maor's book is the only more or less popular account of the history of this universal constant. Maor gives human faces to fundamental mathematics, as in his fantasia of a meeting between Johann Bernoulli and JS Bach. e: The Story of a Number would be an excellent choice for a any student of trigonometry or calculus. --Mary Ellen Curtin

Honorable Mention for the 1994 Award for Best Professional/Scholarly Book in Mathematics, Association of American Publishers

"This is a gently paced, elegantly composed book, and it will bring its readers much pleasure.... Maor has written an excellent book that should be in every public and school library."--Ian Stewart, New Scientist

"Maor wonderfully tells the story of e. The chronological history allows excursions into the lives of people involved with the development of this fascinating number. Maor hangs his story on a string of people stretching from Archimedes to David Hilbert. And by presenting mathematics in terms of the humans who produced it, he places the subject where it belongs--squarely in the centre of the humanities."--Jerry P. King, Nature

"Maor has succeeded in writing a short, readable mathematical story. He has interspersed a variety of anecdotes, excursions, and essays to lighten the flow.... [The book] is like the voyages of Columbus as told by the first mate."--Peter Borwein, Science

"Maor attempts to give the irrational number e its rightful standing alongside pi as a fundamental constant in science and nature; he succeeds very well.... Maor writes so that both mathematical newcomers and long-time professionals alike can thoroughly enjoy his book, learn something new, and witness the ubiquity of mathematical ideas in Western culture."--Choice

"It can be recommended to readers who want to learn about mathematics and its history, who want to be inspired and who want to understand important mathematical ideas more deeply."--EMS Newsletter