Items related to Woman in the Dunes (Vintage International)

Woman in the Dunes (Vintage International) 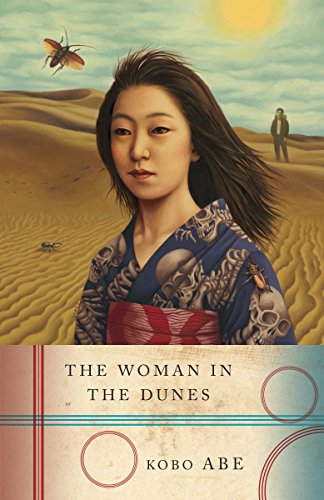 This contemporary Japanese novel combines elements of myth, suspense, and existentialism. In a remote seaside village, Niki Jumpei, a teacher and amateur entomologist, is held captive with a young woman at the bottom of a sand pit, where they must shovel off the ever-advancing sand dunes.

"Abe follows with meticulous precision his hero's constantly shifting physical, emotional and psychological states."
--The New York Times Book Review "As is true of Poe and Kafka . . . Abe creates on the page an unexpected impulsion. One continues reading, on and on."
--The New Yorker About the Author:

Kobo Abe was born in Tokyo in 1924 and grew up in Mukden, Manchuria, during World War II. In 1948 he received a medical degree from Tokyo Imperial University, but he never practiced medicine. Considered one of Japan's foremost novelists, his most famous works include The Face of Another (1964), The Box Man (1973), Secret Rendezvous (1977), and The Ark Sakura (1984). All of Abe's books have been bestsellers in Japan and he was the recipient of numerous literary awards and prizes, including the Yomiuri Prize for The Woman in the Dunes in 1962. He collaborated with director Hiroshi Teshigahara on film adaptations of four of his novels--including The Woman in the Dunes--and was also widely known as a dramatist. He died in 1993.

1. The Woman in the Dunes

2. The Woman in the Dunes

3. The Woman in the Dunes

4. The Woman in the Dunes

5. The Woman in the Dunes (Paperback or Softback)

6. Woman in the Dunes (Paperback)

Book Description Random House USA Inc, United States, 1991. Paperback. Condition: New. Reissue. Language: English. Brand new Book. The Woman in the Dunes, by celebrated writer and thinker Kobo Abe, combines the essence of myth, suspense and the existential novel. After missing the last bus home following a day trip to the seashore, an amateur entomologist is offered lodging for the night at the bottom of a vast sand pit. But when he attempts to leave the next morning, he quickly discovers that the locals have other plans. Held captive with seemingly no chance of escape, he is tasked with shoveling back the ever-advancing sand dunes that threaten to destroy the village. His only companion is an odd young woman. Together their fates become intertwined as they work side by side at this Sisyphean task. Seller Inventory # ABZ9780679733782

7. The Woman in the Dunes

8. The Woman in the Dunes

9. The Woman in the Dunes (Paperback)

Book Description Paperback. Condition: New. Paperback. This contemporary Japanese novel combines elements of myth, suspense, and existentialism. In a remote seaside village, Niki Jumpei, a teacher and amateur entomologist, is held captive with.Shipping may be from multiple locations in the US or from the UK, depending on stock availability. 256 pages. 0.180. Seller Inventory # 9780679733782