Items related to Mind in Society: Development of Higher Psychological... 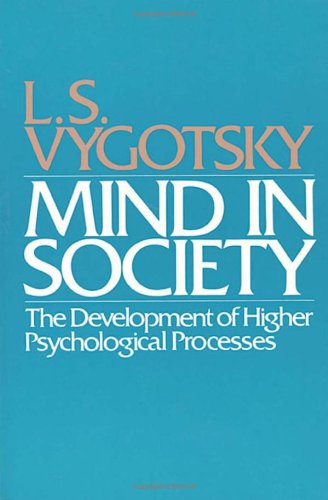 The great Russian psychologist L. S. Vygotsky has long been recognized as a pioneer in developmental psychology. But somewhat ironically, his theory of development has never been well understood in the West. Mind in Society should correct much of this misunderstanding. Carefully edited by a group of outstanding Vygotsky scholars, the book presents a unique selection of Vygotsky's important essays, most of which have previously been unavailable in English. The Vygotsky who emerges from these pages can no longer be glibly included among the neobehaviorists. In these essays he outlines a dialectical-materialist theory of cognitive development that anticipates much recent work in American social science. The mind, Vygotsky argues, cannot be understood in isolation from the surrounding society. Man is the only animal who uses tools to alter his own inner world as well as the world around him. From the handkerchief knotted as a simple mnemonic device to the complexities of symbolic language, society provides the individual with technology that can be used to shape the private processes of mind. In Mind in Society Vygotsky applies this theoretical framework to the development of perception, attention, memory, language, and play, and he examines its implications for education. The result is a remarkably interesting book that is bound to renew Vygotsky's relevance to modern psychological thought.

This little book is an intellectual excitement; it abounds with all manner of ideas, insights, and novel formulations.--Kevin Connolly "Nature "

Vygotsky was a genius. After more than a half a century in science I am unable to name another person who even approaches his incredible analytic ability and foresight. All of my work has been no more than the working out of the psychological theory which he constructed.--A. R. Luria

This is a landmark book, compulsory reading for students of developmental and adult cognition... Mind in Society should stimulate an awakened interest in Vygotsky as a contemporary force rather than a figure of historical interest.--Ann L. Brown "Contemporary Psychology "

This selection of Vygotsky's important writings (most were previously unavailable in English) offers the Western reader a new appreciation of the seminal contributions of one of Russia's most influential psychologists.--Psychology Today

Now, at long last, we have a representative selection of [Vygotsky's] theoretical essays, in a new collection prepared by Michael Cole and his co-workers, under the ingenious title Mind in Society... It pieces together selections from four of Vygotsky's writings: chiefly, an unpublished monograph on 'Tool and Symbol in Children's Development' dating from 1930, and a chapter on 'The History of the Development of Higher Psychological Functions' issued previously in Russian in 1960. However, it has two solid virtues. It was prepared with the active collaboration of A. R. Luria, so it can certainly claim to be authoritative. And it provides the sense we have long needed of Vygotsky's overall theoretical enterprise, of which his studies on thought and language are one, but only one, aspect... [The book] puts [his] ideas into a broader theoretical context, and permits us at last to sort out for ourselves how Vygotsky's work relates to that of his contemporaries and successors in the West. Most particularly, it clarifies the central role that Vygotsky allots to language and symbolic thought in shaping the structure of adult mental life.--Stephen Toulmin "New York Review of Books "

L. S. Vygotsky was a Russian psychologist, the founder of an original holistic theory of human cultural and biosocial development commonly referred to as cultural-historical psychology, and leader of the Vygotsky Circle. Michael Cole is Professor of Communication and Psychology and Director of the Laboratory of Comparative Human Cognition at the University of California, San Diego.

1. Mind in Society: The Development of Higher Psychological Processes

2. Mind in Society and#8211; Development of Higher Psychological Processes (Paper)

4. Mind in Society: The Development of Higher Psychological Processes

5. Mind in Society: The Development of Higher Psychological Processes

7. Mind in Society: The Development of Higher Psychological Processes

Book Description Harvard University Press. Paperback / softback. Condition: New. New copy - Usually dispatched within 4 working days. Vygotsky has long been recognized as a pioneer in developmental psychology. But his theory of development has never been well understood in the West. Mind in Society corrects much of this misunderstanding. Carefully edited by a group of outstanding Vygotsky scholars, the book presents a unique selection of Vygotsky's important essays. Seller Inventory # B9780674576292