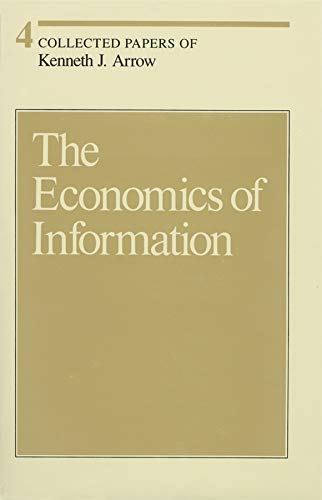 Unlike the papers of some other great economists, those of Kenneth Arrow are being read and studied today with even greater care and attention than when they first appeared in the journals. The publication of his collected papers will therefore be welcomed by economists and other social scientists and in particular by graduate students, who can draw from them the deep knowledge and the discernment in selection of scientific problems that only a master can offer. The author has added headnotes to certain well-known papers, describing how he came to write them.This volume begins with Arrow's papers on statistical decision theory, which served as a foundation for his work on the economics of information. As he writes in his preface, "Statistical method was an example for the acquisition of information. In a world of uncertainty, it was no great leap to realize that information is valuable in an economic sense." The later, applied papers, which operationalize the theory of the early ones, include essays on the demand for information, the economic value of screening devices, and the effect of incomplete information on the structure of organizations, futures markets, and insurance.

A past president of the American Economic Association, Kenneth J. Arrow was awarded the Nobel Memorial Prize in Economic Science in 1972.

COLLECTED PAPERS OF KENNETH J. A