Items related to A Play On Words

Longden, Deric A Play On Words

A Play On Words 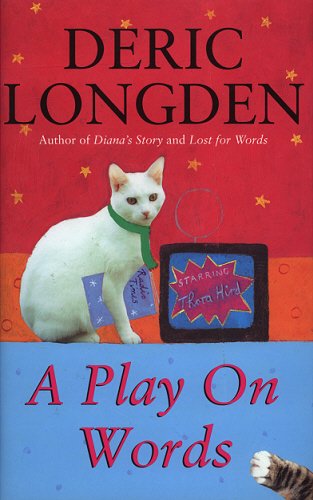 Further episodes in the life of Deric Longden and the Longden household. At least two new characters join the feline cast led by the ever-popular Thermal. The thread running through the book is the interesting experience of watching Lost for Words turn into a television drama, but attached to the thread are the usual wonderful collection of Longden observations of life at home and (not too far) abroad. As usual work suffers constant interruptions from Thermal & Co, but somehow the research gets done. Did you know that Huddersfield has the country's biggest per capita consumption of crinkle-cut chips? And why does two-thirds of all the Benedictine produced get drunk in Bradford?

Further episodes in the life of Deric Longden, his wife and his small army of cats.

Ever since Dame Thora Hird breathed life into the role of Deric Longden's mother in Wide-Eyed and Legless, she had been on at him to write a play based on the sequel, Lost for Words.

'And don't hang about. I'm eighty-three, you know.'

But life doesn't run in straight lines for Deric. Apart from his duties as official guide dog to his blind wife, the writer Aileen Armitage, he is at the beck and call of three and a half cats, a somewhat bemused vole and a tap-dancing squirrel. He also had a book to finish, so the screenplay had to take a back seat for the time being.

But Dame Thora didn't give up. She rang him regularly. 'Come on, lad, get a move on. I'm eighty-five, you know.'

By the time she was eighty-six Deric had finished the script. In January 1999 Lost for Words was finally televised - by which time Dame Thora was eighty-seven going on thirty-two.

In A Play on Words he describes the unique experience of seeing at close hand his book - and an important part of his own life - turn into a film amid the continuing chaos of his private world. Somehow or other, despite the usual hilarious interruptions, his own brand of literary work gets done, influenced by such matters as rag-and-bone men, the Moscow State Circus and crinkle-cut beetroot - and the usual cast of characters.

Book Description Bantam Press, 1999. Hardcover. Condition: Used; Good. Dispatched, from the UK, within 48 hours of ordering. This book is in good condition but will show signs of previous ownership. Please expect some creasing to the spine and/or minor damage to the cover. Seller Inventory # CHL1141412

Book Description Random House Publishing Group, 1999. Condition: Good. First Edition. Ships from the UK. Former Library book. Shows some signs of wear, and may have some markings on the inside. Seller Inventory # GRP9074904

Book Description BANTAM PRESS, 1999. Hardback. Condition: Very Good. The book has been read, but is in excellent condition. Pages are intact and not marred by notes or highlighting. The spine remains undamaged. Seller Inventory # GOR001090504

Book Description Bantam Press, 1999. Hardcover. Condition: Good. Ex-Library Book. Has usual library markings and stamps inside. All orders are dispatched the following working day from our UK warehouse. Established in 2004, we have over 500,000 books in stock. No quibble refund if not completely satisfied. Seller Inventory # mon0005162593

Book Description Bantam Press, 1999. Hardcover. Condition: Used; Good. **Simply Brit** Shipped with Premium postal service within 24 hours from the UK with impressive delivery time. We have dispatched from our book depository; items of good condition to over ten million satisfied customers worldwide. We are committed to providing you with reliable and efficient service at all times. Seller Inventory # 990216

Book Description Bantam Press, 1999. Hardcover. Condition: Used; Good. **SHIPPED FROM UK** We believe you will be completely satisfied with our quick and reliable service. All orders are dispatched as swiftly as possible! Buy with confidence!. Seller Inventory # mon0001440136

Book Description Bantam Press, 1999. Hardcover. Condition: Very Good. A Play On Words This book is in very good condition and will be shipped within 24 hours of ordering. The cover may have some limited signs of wear but the pages are clean, intact and the spine remains undamaged. This book has clearly been well maintained and looked after thus far. Money back guarantee if you are not satisfied. See all our books here, order more than 1 book and get discounted shipping. . Seller Inventory # 7719-9780593044025

Book Description Bantam Press 04/11/1999, 1999. Hardcover. Condition: Very Good. Shipped within 24 hours from our UK warehouse. Clean, undamaged book with no damage to pages and minimal wear to the cover. Spine still tight, in very good condition. Remember if you are not happy, you are covered by our 100% money back guarantee. Seller Inventory # 6545-9780593044025

Book Description BANTAM PRESS, 1999. Condition: Collectible; Very Good. Hand Signed and Not dedicated. This is a very good clean copy with no inscriptions. It has a very good dust jacket and will be posted from the UK within 24 hours by family run bookstore. Please let me know if you require photos of the actual book and I will send them through to you. Just to clarify â " This is NOT AN EX-LIBRARY COPY. Seller Inventory # 1jul20/41