Items related to Hold the Dream 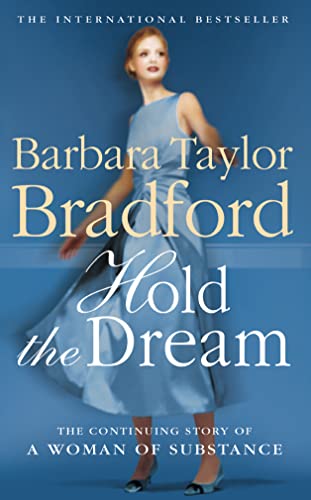 'Queen of the genre.' Sunday Times

‘Few novelists are as consummate as Barbara Taylor Bradford at keeping the reader turning the page. She is one of the world’s best at spinning yarns.’ Guardian

‘A classic saga of loyalty, secrets, passion and intrigue...if you’ve been suffering withdrawal symptoms from Downton, this is for you’ Daily Mail

‘As romantic and thrilling as the rest’ Independent on Sunday

‘Another great yarn from the ultimate storyteller’ The Sun

‘The storyteller of substance.’ The Times

Barbara Taylor Bradford was born in Leeds, and by the age of Barbara Taylor Bradford was born and raised in England. She started her writing career on the Yorkshire Evening Post and later worked as a journalist in London. Her first novel, A Woman of Substance, became an enduring bestseller and was followed by twenty-three others, including the bestselling Harte series. In 2006 The Ravenscar Dynasty began an epic new family series around Ravenscar and the house of Deravenel. Barbara’s books have sold more than eighty-one million copies worldwide in more than ninety countries and forty languages. In October of 2007, Barbara was appointed an OBE by the Queen for her services to literature. She lives in New York City with her husband, television producer Robert Bradford.