Items related to Britain in the Nineteen Thirties 1930s (History of... 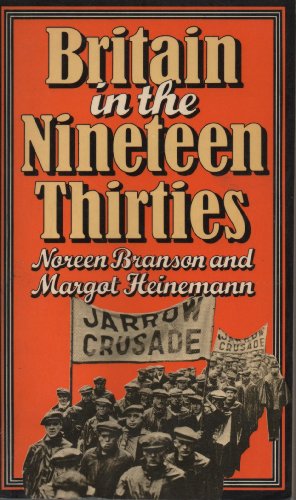 The 30s - a shattering decade for Britain and the Empire. The 30s - a period of glaring economic contrasts: many people facing virtual breakdown of the entire financial system while others lived on in splendour. A time of heavy unemployment and decline in independent small businesses and farms. The rise of the mass media and the American domination of the screen world weakens the old British ruling-class values. A fascinating, difficult era in which the country faced the growing threats of fascism, war and vast social and economic upheaval. The book fulfils its aim of being useful to the student, interesting to the general reader, and pleasurable reading to both.

Book Description Paperback. Condition: Very Good. The book has been read, but is in excellent condition. Pages are intact and not marred by notes or highlighting. The spine remains undamaged. Seller Inventory # GOR001332395

Book Description Paperback. Condition: Good. The book has been read but remains in clean condition. All pages are intact and the cover is intact. Some minor wear to the spine. Seller Inventory # GOR001234777

Book Description Condition: Good. A+ Customer service! Satisfaction Guaranteed! Book is in Used-Good condition. Pages and cover are clean and intact. Used items may not include supplementary materials such as CDs or access codes. May show signs of minor shelf wear and contain limited notes and highlighting. Seller Inventory # 0586037578-2-4

Book Description Paperback. Condition: Good. A tan to the page edges/pages . Minor shelf wear. Pulling to the binding has cause the pages of the book to become slightly loose along the inside of the spine Good condition is defined as: a copy that has been read but remains in clean condition. All of the pages are intact and the cover is intact and the spine may show signs of wear. The book may have minor markings which are not specifically mentioned. Most items will be dispatched the same or the next working day. Seller Inventory # wbb0019966373

Britain in the Nineteen Thirties