Items related to The Third Reich (Seminar Studies in History) 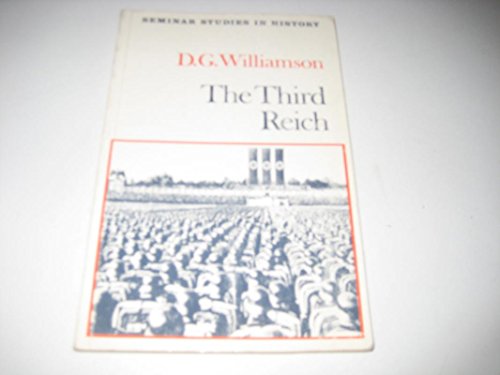 In this greatly expanded third edition, David Williamson provides a concise but comprehensive account of the origins, course and downfall of the Third Reich. He analyses the reasons for Hitler's rise to power and looks at how the Nazi regime consolidated its grip on power during the period March 1933-August 1934. Further sections examine how Nazi Germany was governed and Hitler's economic, social and foreign policies both in peacetime and at war up to 1945. The record of the German opposition and the problems it confronted is also discussed.

Since publication of the first edition in 1982, David Williamson's The Third Reich has become established as one of the most successful books in the Seminar Studies in History series.  In this greatly expanded third edition, the author draws on up-to-date scholarship to guide students through the maze of historical controversies concerning the Third Reich and to offer a comprehensive analysis of the key issues of the period.  In a clear and accessible manner, the new edition provides expanded chapters that:  * introduce readers to the historiography of the Third Reich  * analyse the reasons for Hitler's rise to power  * look at how the Nazi regime consolidated it's grip on power during the period March 1933- August 1934  * explain how Nazi Germany was governed and discuss to what extent Hitler can be viewed as a 'weak dictator'  * analyse Hitler's economic, foreign and social policies in both war and peace up to 1945, as well as the development of Nazi racial and eugenic policies.  The analysis of these themes is backed up with an increased selection of documents, which enable students to discuss the key issues more fully.  Providing a concise but comprehensive account of the origins, course and downfall of the Third Reich, this new edition of an already classic text will be an invaluable introduction to the subject for students.     David Williamson is now a writer and freelance lecturer, formerly head of History and Politics at Highgate School, London. He is the author of nine books on German and International History, including: Bismarck and Germany, 2nd Ed. (Longman, 1997) and Germany from Defeat to Partition, 1945-1963 (Longman 2000)

David Williamson is a writer and lecturer, and former Head of History and Politics at Highgate School. He is the author of a number of books on the history of Germany and Anglo-German relations.

Book Description Condition: New. 1992 Quality Books. Because We Care - Shipped from Canada. Usually ships within 1-2 business days. If you buy this book from us, we will donate a book to a local school. We donate 10,000+ books to local schools every year. Seller Inventory # R16922S