Items related to Noonshade: The Chronicles of the Raven 2 (GOLLANCZ...

Barclay, James Noonshade: The Chronicles of the Raven 2 (GOLLANCZ S.F.)

Noonshade: The Chronicles of the Raven 2 (GOLLANCZ S.F.) 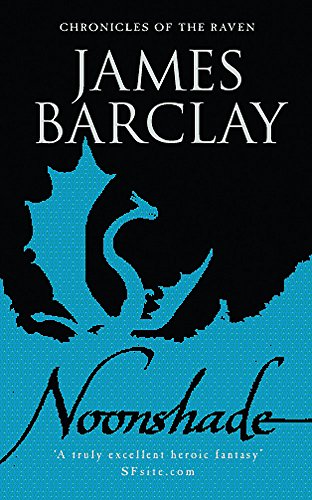 The enthralling sequel to DAWNTHIEF takes the adventure into a new dimension.

The Raven must fight to help the dragons of the Brood Kan defend the dimensional rip opened in the skies of Balaia by the casting of Dawnthief. And then they must somehow close the rip.

And all the time the Wesmen are rampaging through Balaia, laying waste to its cities and besieging the mages of Julatsa in Dordova.

In a market already overcrowded with heroic action fantasy, it is always refreshing to discover an author who does more than tread out the usual sword-and-sorcery tale in three huge doorstopper-sized volumes. James Barclay is just such an author as he more than adequately proved with his scorching debut Dawnthief. Now, his band of slightly ageing past-their-prime mercenaries, The Raven, are back and attempting to right the wrongs from the previous story. The Dawnthief spell has been cast but it has ripped apart a hole between dimensions that will allow an invasion of dragons into Balia and signal the land's destruction. The Raven are forced into an alliance with Sha-Kaan, a dragon whose brood are fighting a desperate war in the dragon dimension. With Balia having to defend itself against armies of Wesmen, The Raven are the only ones able to help the Kaan defeat their enemies and save Balia.

What follows is, quite simply, spectacular storytelling. Barclay reads like a seasoned fantasy veteran, not a writer on only his second novel, and his plotting, characterisation and dialogue are all perfectly honed. Where he excels most though is in the action scenes and Noonshade contains some of the best sword and magic battles ever written. You can feel the air burn with the crackle of spells, almost cry out in pain yourself as a sword cuts through flesh and mourn for a slaughtered character as you would a loved one.

The plot twists and turns with energy and pace but it is the characters that make this such a real treat, especially the Raven who deserve the same cult status as Gemmell's Waylander. Each member of the Raven is a fully realised character, with plausible motivations and plenty of emotional conflict. And it's good to see the female characters getting a bit more page-time too.

The third volume of this trilogy, Nightchild, is out in 2001 and Barclay leaves us hanging wickedly on a thread with just enough questions and unresolved conflicts to be tied up in book three. The Chronicles of the Raven is one the most exciting and exhilarating series in a long time and on this showing James Barclay is a writer with a fantastic future ahead of him. Stunning stuff. --Jonathan Weir

"Truly excellent fantasy is rare. Truly excellent heroic fantasy is rarer still. Discovering a new author who writes truly excellent heroic fantasy is perhaps the rarest gem of all...For Noonshade, the Raven discover that the Dawnthief spell contains its own deceit and was, perhaps, not entirely understood before it was cast. The casting of Dawnthief has ripped a hole between dimensions and, instead of saving Balia, has sown the seeds of certain doom. The rip has drawn the attention of dragon broods who would destroy Balia. The Raven must work with the Kaan brood, protectors of the Balia dimension, to repair the damage done and save Balaia. Dragons, barbarian hordes, sorcerers, demonic summonings, shape-shifters, and the threat of worldwide devastation are all tossed into the mix as the tale unfolds.

It is an epic tale and Barclay tells it with a mastery that is astonishing for only a second novel. The dialogue is fast-paced and well-written. The plot has multiple layers and multiple story lines. The characterization is rich and detailed. Individual characters have their own lives and struggles beyond the central story. Yet, at no time does the tale bog down under the weight of the details."