Items related to The Hungarian Who Walked to Heaven: Alexander Csoma...

The Hungarian Who Walked to Heaven: Alexander Csoma de Koros 1784-1842 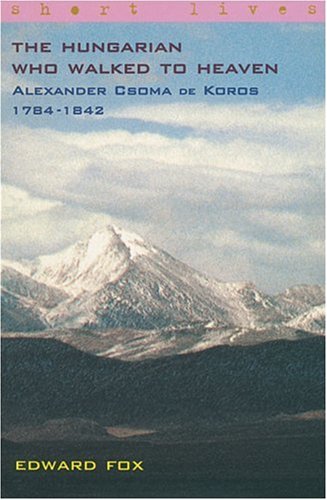 In 1819 Alexander Csoma de Koros, a Hungarian scholar, set off on a 30-year odyssey in search of his own identity, or rather of the origins of the Magyar people. He ended up in Ladakh, where, through a bizane sequence of events, he found himself decoding the mysteries of Tibetan culture for the British government. The desire to travel, as Edward Fox so deftly illustrates, can be a terrible burden on the soul.

The Hungarian Who walked to Heaven is a fascinating tale of Koros, a Hungarian philologist, who in the 1820s and 1830s went in search of the origins of Magyar civilisation in the Himalayas and ended up "discovering" Tibetan culture. It is hard to go wrong with this gripping story, but the author does his best by deploying some rather crude psychology on Koros, very crude anthropology on Hungarians--apparently a "mystery in Europe" (what does that make the English?)--and misleading geography: the only map takes us through somewhere called Asia Minor (presumably the Ottoman Empire) and across Iran (presumably Persia). There is nothing wrong with 60-second guides to interesting moments of history, but please treat the reader with a little more respect. --Miles Taylor

An author and Journalist, Edward Fox was born in New York in 1958 and educated in England. His latest book, Palestine Twilight, will be published in June 2001 by HarperCollins.