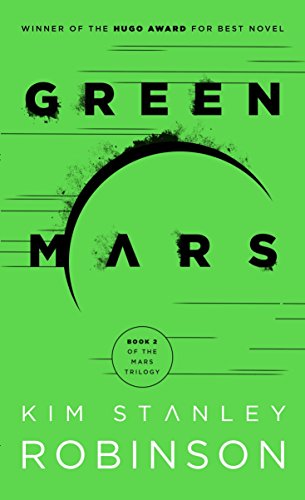 Nearly a generation has passed since the first pioneers landed, but the transformation of Mars to an Earth-like planet has just begun. In Green Mars the colonists will attempt to turn the red planet into a lush garden for humanity. They will bombard the atmosphere with ice meteorites to add moisture. They will seed the red deserts with genetically engineered plants. Then they will tap the boiling planetary core to warm the planet's frozen surface. But their heroic efforts don't go unchallenged. For their plan to transform Mars is opposed by those determined to preserve the hostile and barren beauty of Mars. Led by rebels like Peter Clayborne, these young people are the first generation of children born on Mars, and they will be joined in their violent struggle by original settlers Maya Toitovna, Simon Frasier, and Sax Russell. Against this cosmic backdrop, passions, rivalries, and friendships will explode in a story as big as the planet itself. A novel of breathtaking scope and imagination, of lyric intensity and social resonance, Kim Stanley Robinson employs years of research and state-of-the-art science to create a prophetic vision of where humanity is headed - and of what life will be like on another world.

Kim Stanley Robinson has earned a reputation as the master of Mars fiction, writing books that are scientific, sociological and, better still, fantastic. Green Mars continues the story of humans settling the planet in a process called "terraforming". In Red Mars, the initial work in the trilogy, the first 100 scientists chosen to explore the planet disintegrated in disagreement--in part because of pressures from forces on Earth. Some of the scientists formed a loose network underground. Green Mars, which won the 1994 Hugo Award, follows the development of the underground and the problems endemic to forming a new society.

"One of the major sagas of the [latest] generation in science fiction."--Chicago Sun-Times

"Dense as a diamond and as sharp; it makes even most good novels seem pale and insignificant by comparison."--The Washington Post Book World

Book Description Paperback. Condition: New. Language: English. Brand new Book. Winner of the Hugo Award for Best Novel - Kim Stanley Robinson's classic trilogy depicting the colonization of Mars continues in a thrilling and timeless novel that pits the settlers against their greatest foes: themselves. "One of the major sagas of the [latest] generation in science fiction."--Chicago Sun-Times Nearly a generation has passed since the first pioneers landed on Mars, and its transformation to an Earthlike planet is under way. But not everyone wants to see the process through. The methods are opposed by those determined to preserve their home planet's hostile, barren beauty. Led by the first generation of children born on Mars, these rebels are soon joined by a handful of the original settlers. Against this cosmic backdrop, passions, partnerships, and rivalries explode in a story as spectacular as the planet itself. Seller Inventory # ABZ9780553572391