Items related to The Keep on Fire (Last Rune)

The Keep on Fire (Last Rune) 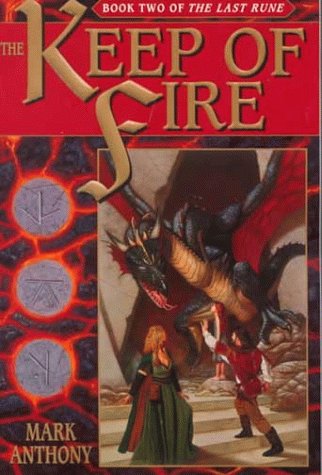 In the sequel to Beyond the Pale, Earth and the magical world of Eldh draw ever closer, the second of the three Great Stone is set free, unleashing plagues of fire and the Burned Men, and Grace and Travis, two all too human heroes, must draw on their strange new powers to save both worlds. Original.

Following his powerful debut novel, Beyond the Pale, the first book of the Last Rune series, Mark Anthony returns with The Keep of Fire. The stylish cover, highlighting a most monstrous dragon by artist Steve Youll, promises a superior fantasy. Happily the book delivers, with strong story telling and a sharp sense of danger. Being the second volume, Anthony has less scene-setting to do: A terrible contagion is spreading and Travis Wilder, having returned to Colorado, finds himself the focus of two secret organisations. When Travis's friend is caught in the torment of the Burning Plague, Travis again journeys to Eldh, joining Grace Beckett on a perilous quest for the Stone of Fire, in a race against time to prevent an apocalyptic inferno engulfing this world and the next.

The Keep of Fire is a little shorter than its predecessor, faster moving, equally engrossing and somewhat darker in tone. It is a serious, complex fantasy, beautifully written, thoughtful, imaginative and thrilling. We discover more about the Dominions, from Shadows Deep to the Summer Sea, learn secrets of the ancient past and are left with a book that is satisfying in its own right, yet which offers tantalising suggestions of what may lie ahead.

A decidedly superior fantasy, Mark Anthony maintains the tradition of J.R.R. Tolkien's The Lord of the Rings and Terry Brooks' Sword of Shannara, while bringing a polished contemporary approach to classic High Fantasy. --Gary S. Dalkin

Beyond The Pale Named the Best First Fantasy Novel by the Rocky Mountain News "Offers a diverse cast of characters and a well-realized world in which the expected does not happen. Anthony is unsparing of the details of castle life, enriching the book with a solid sense of place and time."
-- Robin Hobb "A stunningly rich novel filled with magic, intrigue, great character, horror and humor."
-- Michael Stackpole Look for Mark Anthony's next fantasy novel in spring 2001 The Dark Remains Available wherever Bantam Spectra Books are sold

2. The Keep of Fire: Book Two of the Last Rune Anthony, Mark

Book Description Spectra, 1999. Condition: New. From an exciting new master of fantasy comes the second novel of an epic tale filled with dangerous magic, dark mystery, and unrelenting suspense. Travis Wilder has returned from the otherworld of Eldh, hoping to settle back into his humdrum life in the mountains of contemporary Colorado. But he soon finds himself stalked by two shadowy organizations, each aware of his incredible journey and each determined to exploit it whatever the cost to Travis.or to Eldh. Meanwhile, a terrifying new contagion is spreading like wildfire, a disease with no cure, which some are comparing to the Black Plague. When the disease strikes his closest friend, Travis is drawn back to Eldh, where the same epidemic, known as the Burning Plague, is wreaking another kind of havoc. There, in a realm of gods and monsters, myths and runecraft, Travis and his former companion Grace Beckett herself from Earth but now living on Eldh must solve the riddle of the plague. Where did it come from? What is its purpose? And how can it possibly be stopped.before it completely destroys two coexisting worlds: ancient Eldh and modern Earth. Seller Inventory # 9780553379563