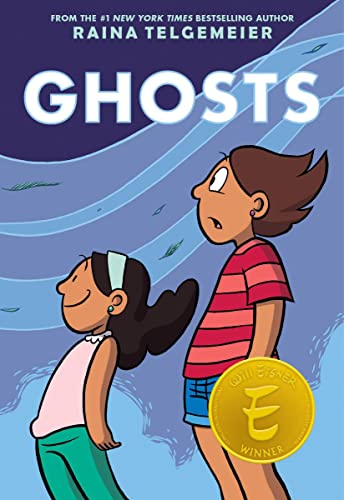 From award-winning graphic novelist Raina Telgemeier comes a new story about family, friendship and hope. Catrina and her family are moving to the coast of Northern California because her little sister, Maya, is sick. Cat isn't happy about leaving her friends for Bahia de la Luna, but Maya has cystic fibrosis and will benefit from the cool, salty air that blows in from the sea. As the girls explore their new home, a neighbor lets them in on a secret: There are ghosts in Bahia de la Luna. Maya is determined to meet one, but Cat wants nothing to do with them. As the time of year when ghosts reunite with their loved ones approaches, Cat must figure out how to put aside her fears for her sister's sake - and her own...

* "Telgemeier has her finger on the pulse of middle-grade readers, and this might be her best yet." -- Booklist, starred review
* "Telgemeier's bold colors, superior visual storytelling, and unusual subject matter will keep readers emotionally engaged and unable to put down this compelling tale." -- Kirkus Reviews, starred review
* "A can't-miss addition to middle grade graphic novel shelves; hand to fans of the author and newcomers alike." -- School Library Journal, starred review
* "The story is consistently engaging, the plot is tightly built." -- Publishers Weekly, starred review
"[A] gem of a graphic novel" -- Bulletin of the Center for Children's Books
"Raina Telgemeier's characters fizz with visual energy." -- The New York Times Book Review

Raina Telgemeier is the #1 New York Times bestselling, multiple Eisner Award-winning creator of Smile and Sisters, which are both graphic memoirs based on her childhood. She is also the creator of Drama, which was named a Stonewall Honor Book and was selected for YALSA's Top Ten Great Graphic Novels for Teens. Raina lives in the San Francisco Bay Area. To learn more, visit her online at www.goRaina.com.

Book Description Hardcover. Condition: New. 1. Hardcover. From Raina Telgemeier, the #1 New York Times bestselling, multiple Eisner Award-winning author of Smile , Drama , and Sisters Catrina and her family are moving to the coast of Northern Cal.Shipping may be from multiple locations in the US or from the UK, depending on stock availability. 256 pages. 0.270. Seller Inventory # 9780545540612