Items related to Riches and Poverty: An Intellectual History of Political...

Winch, Donald Riches and Poverty: An Intellectual History of Political Economy in Britain, 1750–1834 (Ideas in Context)

Riches and Poverty: An Intellectual History of Political Economy in Britain, 1750–1834 (Ideas in Context) 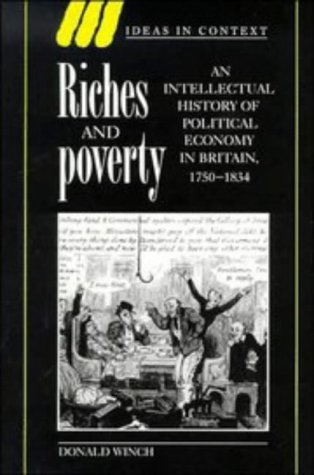 In Riches and Poverty, Donald Winch explores the implications of a fundamental and influential idea in political economy. Adam Smith's science of the legislator provided a key to studying the rich and poor in commercial societies, transformed an ancient debate on luxury and inequality, and furnished a basis for assessing the American and French revolutions. Against this background, Britain embarked on its career as the first manufacturing nation, and Malthus made his first contributions to a debate which concluded with the Poor Law Amendment Act of 1834. Malthus provoked fierce opposition from the Lake poets, opening an intellectual rift that persisted throughout the nineteenth century and continues to influence our perceptions of cultural history. Donald Winch has written a compelling and consistently-argued narrative of these developments, which emphasises throughout the moral and political bearings of economic ideas.

'Riches and Poverty is a powerful, innovative and magesterial survey. Large swathes of it are virtually definitive.' Boyd Hilton, The Times Higher Education Supplement

Riches and Poverty explores the moral and political economy of wealth creation, centring on Adam Smith and Robert Malthus, and encompassing the American and French revolutions, the Poor Law debate, and Britain's emergence as an industrial nation. Donald Winch has written a compelling study of a fundamental idea in political economy.