Items related to Statistics for Experimenters: An Introduction to Design,...

Statistics for Experimenters: An Introduction to Design, Data Analysis and Model Building (Wiley Series in Probability and Statistics) 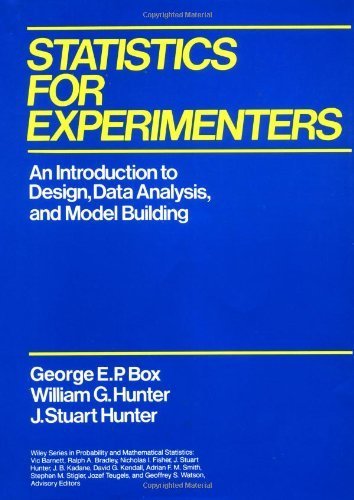 Introduces the philosophy of experimentation and the part that statistics play in experimentation. Emphasizes the need to develop a capability for "statistical thinking" by using examples drawn from actual case studies.

"It is to be hoped ... that experimenters in all fields will be encouraged to read this text." (Biometrics, June 1979)

"The authors are to be congratulated for having written an excellent book. Students fortunate enough to have this as a text will have the opportunity to learn much, and not the least from the review questions and numerous well constructed problems. Engineers wishing to advance their elementary understanding of statistical design and analysis will be delighted with this work. The writing is literate, and the technical aspect impeccable." (Journal of Quality Technology, Vol. 11, No. 1, Jan. 1979, Lloyd S. Nelson, General Electric Co., Louisville, KY)

1. Statistics for Experimenters: An Introduction to Design, Data Analysis, and Model Building

2. Statistics for Experimenters: An Introduction to Design, Data Analysis, and Model Building