Items related to Crocodile on the Sandbank

Peters, Elizabeth Crocodile on the Sandbank

Crocodile on the Sandbank 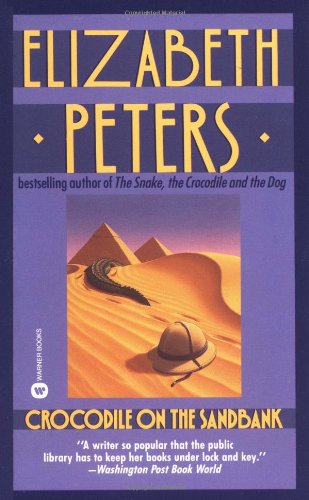 Meet Egyptologist Amelia Peabody in the first mystery in the Victorian-era set, New York Times bestselling "sparkling series" (Marilyn Stasio, New York Times Book Review). "If Indiana Jones were female, a wife, and a mother who lived in Victorian times, he would be Amelia Peabody Emerson."--Publishers Weekly Amelia Peabody, that indomitable product of the Victorian age, embarks on her debut Egyptian adventure armed with unshakable self-confidence, a journal to record her thoughts, and, of course, a sturdy umbrella. On her way to Cairo, Amelia rescues young Evelyn Barton-Forbes, who has been abandoned by her scoundrel lover. Together the two women sail up the Nile to an archeological site run by the Emerson brothers-the irascible but dashing Radcliffe and the amiable Walter. Soon their little party is increased by one-one mummy that is, and a singularly lively example of the species. Strange visitations, suspicious accidents, and a botched kidnapping convince Amelia that there is a plot afoot to harm Evelyn. Now Amelia finds herself up against an unknown enemy-and perilous forces that threaten to make her first Egyptian trip also her last . . . Praise for Elizabeth Peters and Crocodile on the Sandbank "A writer so popular that the public library has to keep her books under lock and key." -Washington Post Book World "Grand views of Egyptian antiquities . . . a sparkling series." -Marilyn Stasio, New York Times Book Review

Elizabeth Peters' unforgettable heroine Amelia Peabody makes her first appearance in this clever mystery. Amelia receives a rather large inheritance and decides to use it for travel. On her way through Rome to Egypt, she meets Evelyn Barton-Forbes, a young woman abandoned by her lover and left with no means of support. Amelia promptly takes Evelyn under her wing, insisting that the young lady accompany her to Egypt, where Amelia plans to indulge her passion for Egyptology. When Evelyn becomes the target of an aborted kidnapping and the focus of a series of suspicious accidents and mysterious visitations, Amelia becomes convinced of a plot to harm her young friend. Like any self-respecting sleuth, Amelia sets out to discover who is behind it all. --Coco Avondale

"Dastardly deeds, whirlwind romances, curious mummies and all the fun and intrigue of Egyptian excavations, with a heroine who wields a sturdy parasol rather than a magnum. Accomplished entertainment." -- The Guardian

'Between Amelia Peabody and Indiana Jones, it's Amelia - in wit and daring - by a landslide' -- The New York Times Book Review

1. Crocodile on the Sandbank (Amelia Peabody)

2. Crocodile on the Sandbank (Amelia Peabody)

3. Crocodile on the Sandbank (Amelia Peabody)

4. Crocodile on the Sandbank (Amelia Peabody)

5. Crocodile on the Sandbank Peters, Elizabeth