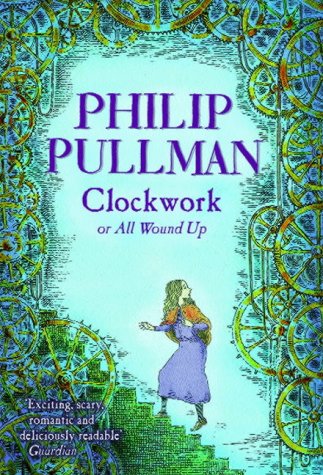 Tick, tock, tick, tock! Some stories are like that. Once you've wend them up, nothing will stop them ...A tormented apprentice clock-maker, a deadly mechanical knight in armour - and the sinister Dr Kalmenius, who some say is the devil ...Wind up these characters, fit them into a story on a cold winter's evening, with the snow swirling down, and suddenly life and the story begin to merge in a peculiarly macabre - and unstoppable - way. Almost like clockwork ...

While Philip Pullman's greatest popularity is as a creator of novel-length magical realism for young adults, such as The Northern Lights, he continues to explore and stretch the limits of other children's and young adult genres. Clockwork is no exception. With its inspiration lying solidly in the German romantic tradition of E.T.A. Hoffmann and the Brothers Grimm, the story begins, as all good fairy tales do, with someone whose human weakness sets events inescapably in motion. As the townspeople of Glockenheim gather in the White Horse Tavern on the eve of the unveiling of a new figure for their great town clock, Karl, the clockmaker's apprentice, reveals to Fritz, a young storyteller, that he has not been able to construct the figure. A new clock figure is expected of all apprentices, and Karl is the first in hundreds of years to fail. Fritz, in his turn, has the beginnings of a new story to tell, and as it rolls off his tongue, its dark antagonist materializes and offers Karl his dearest wish. Not surprisingly, Karl's Faustian pact brings him destruction, but an innocent child is the deus ex machina that saves another child and the spirit of the town from seemingly ineluctable oblivion. With its eerie black-and-white illustrations by Leonid Gore and its happily-ever-after ending to some thrilling suspense, Clockwork is a fine fairy tale for younger children and a thought- provoking twist on the art of narrative for older ones. --Barrie Trinkle

"It has the feel of a classic fairy tale. It's the most elegantly constructed, chilling story that makes the hair stand up on the back of your neck" (Jacqueline Wilson)

"Deeply satisfying and deserves to become a classic" (TES)