Items related to Plays By Women: Objections To Sex And Violence; Rose's... 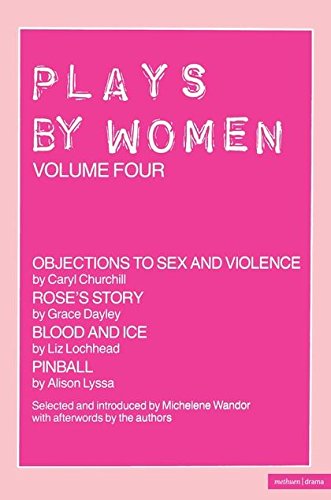 Caryl Churchill is an award-winning playwright, whose plays are renowned for their striking influence upon contemporary British theatre practices. Indicative of her enduring impression upon the theatrical landscape, Churchill has won Obie Awards for her widely celebrated plays Cloud 9 (1979), Top Girls (1982), Serious Money (1987) and A Number (2002). Further cementing her reputation as an outstanding playwright, in 2002 Churchill won an Obie Award for Lifetime Achievement and in 2010 was placed in the American Theatre Hall of Fame. She continues to produce innovative and provocative work, such as Seven Jewish Children - a play for Gaza (2009) and Love and Information (2012), and in January 2016 her latest full-length play, Escaped Alone, opened at the Royal Court Theatre to great acclaim. With an illustrious theatre career that transcends four decades, Caryl Churchill is arguably more than just one of Britains most revered female playwrights; she is one of Britains most respected and groundbreaking working today.

Four British plays deal with a poet and her mother, a family's breakdown in communication, a woman who literally wrestles with her problems, and the interaction of a group of office workers.

Book Description Paperback. Condition: New. Vol 4. Language: English. Brand new Book. Included in this volume are Caryl Churchill's Vinegar Tom, about witchcraft in the seventeenth century; Dusa, Fish, Stas and Vi, an account of the lives of four young women by Pam Gems; Louise Page's Tissue, about breast cancer; and Aurora Leigh, adapted by Michelene Wandor herself from Elizabeth Barrett Browning's verse novel. Each play has an afterword by its author, and the volume opens with an introduction by the editor. Seller Inventory # AAV9780413567406