Items related to A Taste Of Honey (Modern Classics)

A Taste Of Honey (Modern Classics) 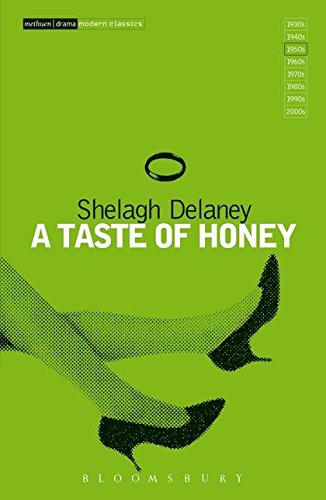 A Taste of Honey became a sensational theatrical success when first produced in London by Joan Littlewood's Theatre Workshop company. It was made into a highly acclaimed film in 1961. The play is about the adolescent Jo and her relationships with those about her - her irresponsible, roving mother Helen and her mum's newly acquired drunken husband, the black sailor who leaves her pregnant and Geoffrey the homosexual art student who moves in to help with the baby. It is also about Jo's unshakeable optimism throughout her trials. This story of a mother and daughter relationship set in working class Manchester continues to enthral new generations of readers and audiences.

Now established as a modern classic, this comic and poignant play by a then nineteen-year-old working-class Lancashire girl was praised at its London premiere in 1958 by Graham Greene as having ""all the freshness of Mr Osborne's Look Back in Anger and a greater maturity.""

'Some of Delaney's themes may feel dated but her writing still glitters dangerously and wittily. A Taste of Honey remains a passionate statement about real people trapped in poverty, deprived of ambition and vulnerable to manipulation by the fickleness of others.' Independent (19 November 2008) 'Brawling, boozing, teenage pregnancy and fractured families: Shelagh Delaney's benchmark drama, first staged by Joan Littlewood in London in 1958, has lost none of its relevance 50 years on... The quirkiness and passion of Delaney's young voice still rings out... It remains passionate and pungent.' The Times (19 November 2008) 'Its raw eloquence, sometimes almost lyrical, its tough, swaggering humour...its frank brutality and unblinking humanity.' Sunday Times (23 November 2008)

Shelagh Delaney was born in Salford, Lancashire. She is most well-known for A Taste of Honey, for which she won the Foyle's New Play Award and the New York Drama Critics' Circle Award. She wrote the screenplay for the film version with Tony Richardson and was awarded the British Film Academy Award and the Robert Flaherty Award. Her other screenplays include The White Bus and Charley Bubbles, for which she won the Writers' Guild Award. She has also written for television and radio and has had a collection of short stories published. She died in 2011.

Book Description Bloomsbury Publishing PLC. Paperback / softback. Condition: New. New copy - Usually dispatched within 4 working days. First issued by Methuen in 1959, this play was the first title in the "Modern plays" series aimed at the burgeoning readership of young theatregoer This title and five others are reissued, representing the range and vitality of the list of titles in print . Seller Inventory # B9780413316806

Book Description Methuen. Condition: New. 1959. New Impression. Paperback. First issued by Methuen in 1959, this play was the first title in the "Modern plays" series aimed at the burgeoning readership of young theatregoer This title and five others are reissued, representing the range and vitality of the list of titles in print . Series: Modern Classics. Num Pages: 96 pages. BIC Classification: DD. Category: (G) General (US: Trade). Dimension: 199 x 128 x 7. Weight in Grams: 100. . . . . . Books ship from the US and Ireland. Seller Inventory # V9780413316806