Items related to The Norton Anthology of American Literature

The Norton Anthology of American Literature 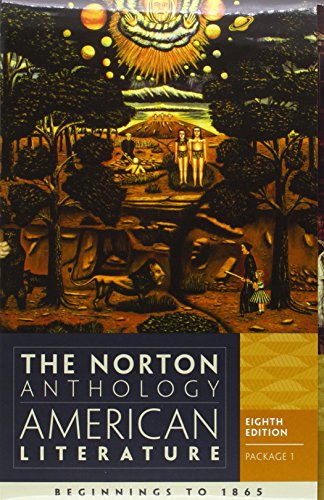 The Eighth Edition features a diverse and balanced variety of works and thorough but judicious editorial apparatus throughout. The new edition also includes more complete works, much-requested new authors, 170 in-text images, new and re-thought contextual clusters, and other tools that help instructors teach the course they want to teach. The Norton Anthology of American Literature is now available as an interactive ebook, at just a fraction of the print price.

Nina Baym (Ph.D. Harvard) is Swanlund Endowed Chair and Center for Advanced Study Professor Emerita of English and Jubilee Professor of Liberal Arts and Sciences at the University of Illinois at Urbana-Champaign. She is the author of The Shape of Hawthorne's Career; Woman's Fiction: A Guide to Novels by and About Women in America, 1820-1870; Novels, Readers, and Reviewers: Responses to Fiction in Antebellum America; American Women Writers and the Work of History, 1790-1860; American Women of Letters and the Nineteenth-Century Sciences and most recently, Women Writers of the American West, 1833-1927. Some of her essays are collected in Feminism and American Literary History; she has also edited and introduced many reissues of work by earlier American women writers, from Judith Sargent Murray through Kate Chopin. In 2000 she received the MLA's Hubbell Medal for lifetime achievement in American literary studies. Robert S. Levine (Ph.D. Stanford) is Distinguished University Professor of English and Distinguished Scholar-Teacher at the University of Maryland, College Park. He is the author of Conspiracy and Romance: Studies in Brockden Brown, Cooper, Hawthorne, and Melville; Martin Delany, Frederick Douglass, and the Politics of Representative Identity; and Dislocating Race and Nation: Episodes in Nineteenth-Century American Literary Nationalism. He has edited a number of books, including The Cambridge Companion to Herman Melville; Martin R. Delany: A Documentary Reader; Hemispheric American Studies; and a Norton Critical Edition of Hawthorne's The House of the Seven Gables. Wayne Franklin (Ph.D. University of Pittsburgh) is Professor and Head of English, University of Connecticut. He is the author of James Fenimore Cooper: The Early Years (the first volume of his definitive biography, from Yale University Press), The New World of James Fenimore Cooper, and Discoverers, Explorers, Settlers: The Diligent Writers of Early America. He is the editor of American Voices, American Lives: A Documentary Reader and The Selected Writings of Thomas Jefferson, A Norton Critical Edition, and co-editor, with Michael Steiner, of Mapping American Culture. Philip F. Gura (Ph.D. Harvard) is William S. Newman Distinguished Professor of American Literature and Culture and Adjunct Professor of Religious Studies at the University of North Carolina at Chapel Hill. He is the author of many books, including The Wisdom of Words: Language, Theology, and Literature in the New England Renaissance; A Glimpse of Sion's Glory: Puritan Radicalism in New England, 1620-1660; Jonathan Edwards, America's Evangelical; and American Transcendentalism: A History. For ten years he was editor of the journal Early American Literature. He is an elected member of the Society of American Historians, the Massachusetts Historical Society, the American Antiquarian Society, and the Colonial Society of Massachusetts. Jerome Klinkowitz (Ph.D. Wisconsin), is University Distinguished Scholar and Professor of English at the University of Northern Iowa. He is the author or editor of over forty books in postwar culture and literature, among them, Structuring the Void: The Struggle for Subject in Contemporary American Fiction; Kurt Vonnegut's America; Literary Disruptions: The Making of a Post-Contemporary American Fiction; and The Practice of Fiction in America: Writers from Hawthorne to the Present. Arnold Krupat (Ph.D. Columbia) is Professor of Literature at Sarah Lawrence College. He is the author of, among other books, Ethnocriticism: Ethnography, History, Literature; Red Matters: Native American Studies; and, most recently, All That Remains: Varieties of Indigenous Expression (2009). He is the editor of a number of anthologies, including Native American Autobiography: An Anthology and New Voices in Native American Literary Criticism. With Brian Swann, he edited Here First: Autobiographical Essays by Native American Writers, which won the Wordcraft Circle of Native Writers and Storytellers Award for best book of nonfiction prose in 2001. Mary Loeffelholz (Ph.D. Yale) is Professor of English and Vice Provost for Academic Affairs at Northeastern University. She is the author of Dickinson and the Boundaries of Feminist Theory; Experimental Lives: Women and Literature, 1900-1945; and, most recently, From School to Salon: Reading Nineteenth-Century American Women's Poetry. With Martha Nell Smith, she edited the Blackwell Companion to Emily Dickinson. Her essays have appeared in such journals as American Literary History, English Literary History, the Yale Journal of Criticism, and Modern Language Quarterly. Jeanne Campbell Reesman (Ph.D. University of Pennsylvania) is Ashbel Smith Professor of English at the University of Texas at San Antonio. She is author of Houses of Pride: Jack London's Race Lives, Jack London: A Study of the Short Fiction, and American Designs: The Late Novels of James and Faulkner, and editor of Speaking the Other Self: American Women Writers, and Trickster Lives: Culture and Myth in American Fiction. With Wilfred Guerin et al. she is co-author of A Handbook of Critical Approaches to Literature and with Earle Labor of Jack London: Revised Edition. With Kenneth Brandt she is co-editor of MLA Approaches to Teaching Jack London, with Leonard Cassuto Rereading Jack London, with Dale Walker No Mentor but Myself: Jack London on Writing and Writers, and with Sara S. Hodson Jack London: One Hundred Years a Writer. She and Noel Mauberret are co-editors of a series of 25 new Jack London editions in French published by Editions Phebus of Paris. She is presently at work on two books: Mark Twain Versus God: The Story of a Relationship, and, with Sara S. Hodson, The Photography of Jack London. She is a member of the Executive Board of the American Literature Association and founder and Executive Coordinator of the Jack London Society. Patricia B. Wallace (Ph.D. Iowa) is Professor of English at Vassar College. She is a contributing editor of The Columbia History of American Poetry; her essays and poems have appeared in such journals as The Kenyon Review, The Sewanee Review, MELUS and PEN America. She has been a recipient of fellowships from the NEA, the Mellon Foundation, and the ACLS.

1. The Norton Anthology of American Literature, Vol. A & B

2. The Norton Anthology of American Literature, Vol. A & B