Items related to The Iliad of Homer: The Wrath of Achilles: Shorten...

The Iliad of Homer: The Wrath of Achilles: Shorten Version (Norton Library (Paperback)) 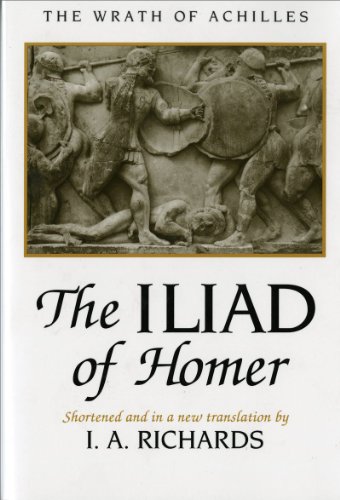 The Iliad, the heroic Greek epic called by I. A. Richards "the most influential poem in the Western tradition," describes what happens toward the end of the Trojan War, when a quarrel between Agamemnon and the Greek hero Achilles sets in motion tragic events that bring the war to its conclusion. This edition of the Iliad, abridged and translated by the noted critic and translator I. A. Richards, has made this classic work of literature available to modern readers since 1958 in a remarkably readable version. Mr. Richards has cut many passages that are not essential to the storyline and has omitted books 2, 10, 13, and 17. Removing the stylized decoration that can hinder a nonspecialist reader, he makes the language of the poem clearly accessible, and his narrative condensation allows the action to stand out boldly.

1. The Iliad of Homer

3. The Iliad of Homer

4. The Iliad of Homer [Paperback] Homer and I. A. Richards

5. THE ILIAD OF HOMER