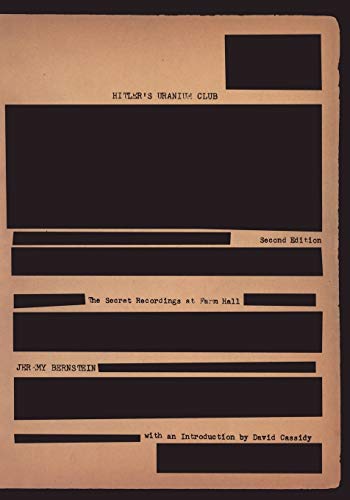 From April through December of 1945, ten of Nazi Germany's greatest nuclear physicists were detained by Allied military and intelligence services in a kind of gilded cage at Farm Hall, an English country manor near Cambridge. The physicists knew the Reich had failed to develop an atomic bomb, and they soon learned, from a BBC radio report on August 6, that the Allies had succeeded in their own efforts to create such a weapon. But what they did not know was that many of their meetings and private conversations were being monitored and recorded by British agents. This book contains the complete collection of transcripts that were made from these secret recordings, providing an unprecedented view of how the German scientists, including two Nobel Laureates, thought and spoke about their roles during the war.

Great Reviews!
These important documents, fully annotated by the author--not only reveal what the German scientists knew and didn't know about building the atomic bomb in 1945, they also tell us what it was like to be a scientist in Germany during the Second World War. "The transcripts provide a unique insight into the characters, relationships, and thoughts of a remarkable group of individuals." --Nature

September 1939: The Third Reich launches the first military research effort into the viability of producing atomic weapons. For the project, the Nazis bring together an elite team of German scientists, who call themselves "The Uranium Club". For students of World War II or the atomic age, or anyone fascinated by the intertwining of science and politics, Hitler's Uranium Club provides an opportunity rare in recorded history: the chance to eavesdrop on pivotal figures in history as they complete one era, come to terms with it, and prepare their strategy for the next. As noted science historian David Cassidy writes in his introduction, "It is as though these men were lifted out of history at a crucial turning point - from the age of conventional weapons to the nuclear era - placed within a timeless container, and told to discuss their past and future as the recorders roll".

Book Description Condition: New. Brand New Original US Edition.We Ship to PO BOX Address also. EXPEDITED shipping option also available for faster delivery.This item may ship from the US or other locations in India depending on your location and availability. Seller Inventory # ANNNUS-10765