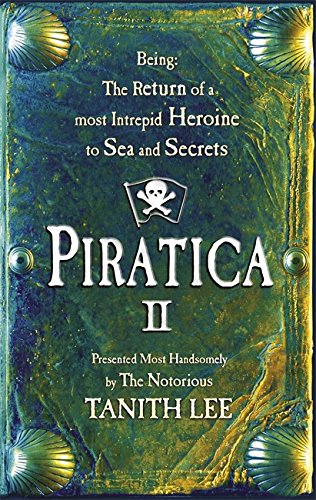 Art Blastside in her second daring adventure upon the high seas in search of missing treasure - and into the greatest sea battle of all time.

Having escaped the dreary Angels Academy for Young Maidens, 17-year-old Artemesia Blastside has rediscovered her mother's old friends and welded them into a formidable, motley crew of pirates. After successfully leading them through the haunts of highwaymen, pirates and smugglers in the treasure hunt of all time, Art has won her mother's crown as the famous PIRATICA. She is now the most admired pirate in England. And England is in the grip of piratomania.

But treasure snatched from her grasp still beckons from Parrot Island - and so it's time to lead the next high-sea adventure and try to reclaim what was almost hers. At her side is the gorgeous Felix Phoenix; and in her way, across war-torn seas, is the dastardly and monstrous Little Goldie Girl.

And on the horizon is the greatest sea battle of all time ...

Presented most handsomely by the notorious author Tanith Lee, Piratica is her daring tale of a single-girl's adventure upon the high seas and is most definitely not what it says it is on the tin--this is a novel of great invention and bountiful surprises.

Taking place in a parallel world in the year Seventeen-Twelvety (approximately 1802) this almost historical adventure begins with 16-year-old Miss Artemesia Fitz-Willoughby Weatherhouse, or Art for short, coming to her senses in her select but dreary prison that is the Angels Academy for Young Ladies. She longs for the life her deceased mother Molly led and is determined to break out and rebel against her uneasy aristocratic father. Molly Faith was a notorious female pirate who coined and earned the feared nickname Piratica.

Taking a rare chance to escape her educational shackles, Art makes for Ports Mouth and the unruly inn where her mother's old shipmates congregate to drown their sorrows. Taking on her mother's mantle and battle cry--Art urges them to resurrect their former seafaring career of blaggardry and to strike out for further fame and infamy. It is at this juncture that Art learns a fearful and totally jaw-dropping truth about her infamous mother's past life. It's a twist so unexpectedly twisty that it may well be the twistiest turn a story has ever embarked upon.

This is a novel about which the reader cannot help but feel an enormous sense of fun and warmth. The author's editorial tongue is firmly in cheek throughout, but its rip-roaring spirited and pleasurable nevertheless. Suitable for readers aged 12 and over. --John McLay

'... a great adventure ... the language is highly imaginative ... Adults and children alike can become immersed in this complex, distincitve and vividly depicted creation.' (Reviews)

On recent evidence, pirate stories look like being the next big thing. If so, may they all be as much fun as this one, by the Cat's Elbows! (Jan Mark, The Guardian)

A glorious roustabout of a tale, full of yummy set pieces and terrific adventures, unbelievable in a most satisfying way. The language is rip-roaring or glides like a seagull, as needed. And the thrilling dénouement is romantic as heck. (Kirkus Review: Starred)

... a wonderfully rumbustious fantasy that is as clever as it is entertaining. (The Independent)

Tanith Lee restores one's faith in fiction as the expression of imagination and original thought. (The Guardian)

Book Description Hodder Children's Books, 2006. Paperback. Condition: New. New. This book is in stock now, in our UK premises. Photos of most of our books are available - please ask, as dustjacket and cover illustrations vary, and unless the accompanying image is marked 'Bookseller Image', it is an Abebooks Stock Image, NOT our own. Overseas buyers also note that shipping rates apply to packets of 750g and under, and should the packed weight of an item exceed this we reserve the right to ship via 'Economy', or request extra postage prior to fulfilling the order, or cancel. Seller Inventory # mon0000113754