Items related to The Second Horseman 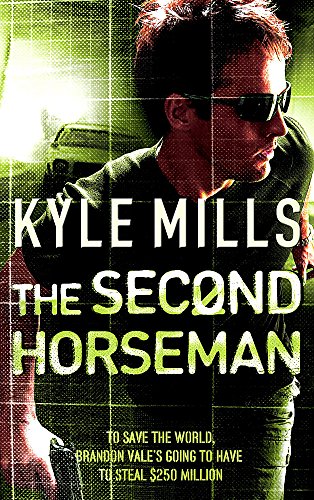 Brandon Vale is a career thief - the best there is. He's never been caught, until he is arrested for a crime he didn't commit. Then he is broken out of prison against his will by Richard Scanlon, the former FBI agent who framed him in the first place.

Scanlon has discovered that a Ukranian crime organization is auctioning twelve nuclear warheads to the highest bidder, but he can't convince the government that the sale isn't a hoax. He gives Brandon a choice: go back to jail for the next twenty years, or somehow steal $250 million from Las Vegas and buy the warheads himself . . .

Lead character Salam Al Fayed - 'Fade' - is a first-ballot certainty for the Thriller Hall of Fame. (Lee Child on Fade)

'In the world of political thrillers, I have the feeling that young Kyle Mills will soon be a very big player' (Frederick Forsyth)

Kyle Mills is an undiscovered gem in the UK. A close family
member worked for the security services in the US and so he, without giving
away any secrets, has a rare insight into how power and politics, crime and
control effects our world. He is also a terrific writer and creates great
maverick characters, cracking high-action plots and thinks up premises that
mess with all one's preconceptions of what is right and wrong. In this book
he competes with TV's '24' for sheer adrenalin. Try this and then try the
rest of his novels - you won't be disappointed. Alex Bonham, Kyle Mills's
UK Editor

Book Description Hodder Paperback, 2007. Paperback. Condition: Good. Connecting readers with great books since 1972. Used books may not include companion materials, some shelf wear, may contain highlighting/notes, may not include cdrom or access codes. Customer service is our top priority!. Seller Inventory # S_288469573

Book Description Paperback. Condition: Very Good. The book has been read, but is in excellent condition. Pages are intact and not marred by notes or highlighting. The spine remains undamaged. Seller Inventory # GOR001173374

Book Description Paperback. Condition: Good. The book has been read but remains in clean condition. All pages are intact and the cover is intact. Some minor wear to the spine. Seller Inventory # GOR000959064

Book Description Paperback. Condition: Fair. A readable copy of the book which may include some defects such as highlighting and notes. Cover and pages may be creased and show discolouration. Seller Inventory # GOR002197411

Book Description Hodder Paperbacks, 2007. Paperback. Condition: Good. A slight tan to page edges Good condition is defined as: a copy that has been read but remains in clean condition. All of the pages are intact and the cover is intact and the spine may show signs of wear. The book may have minor markings which are not specifically mentioned. Most items will be dispatched the same or the next working day. Seller Inventory # wbb0014175201

Book Description -. Paperback. Condition: Very Good. The Second Horseman This book is in very good condition and will be shipped within 24 hours of ordering. The cover may have some limited signs of wear but the pages are clean, intact and the spine remains undamaged. This book has clearly been well maintained and looked after thus far. Money back guarantee if you are not satisfied. See all our books here, order more than 1 book and get discounted shipping. Seller Inventory # 7719-9780340835951

Book Description Hodder Paperbacks 17/05/2007, 2007. Condition: Very Good. Shipped within 24 hours from our UK warehouse. Clean, undamaged book with no damage to pages and minimal wear to the cover. Spine still tight, in very good condition. Remember if you are not happy, you are covered by our 100% money back guarantee. Seller Inventory # 6545-9780340835951