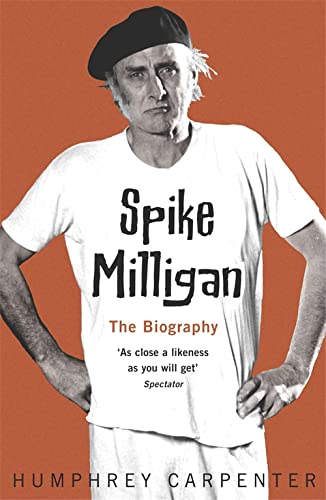 Spike Milligan was one of our best-loved comics as well as one of our most original. In this first major assessment of Spike's life and career, the highly respected biographer Humphrey Carpenter has - through copious research and access to many of those closest to the great man - unearthed a character who could be as difficult and contradictory as he was generous and talented.

The creator of The Goons was to influence a whole generation of comics, yet was never to feel fully valued. His periods of depression were matched by periods of high creativity - there were poems, novels, volumes of biography, as well as TV series and a one-man show as Spike searched for his best means of expression. There was also, as revealed here, his inveterate womanising. Married three times and with four children to whom he was devoted, two illegitimate children were to remain barely acknowledged.

Detailing both his private and professional

life, Humphrey Carpenter gives us the most revealing portrait yet of this highly complex genius.

Humphrey Carpenter's Spike Milligan: The Biography is a brilliantly incisive journey into the life and mind of this mentally tormented comedy genius, and no subsequent book is likely to offer such a striking picture of a unique entertainment life. But one would expect no less from Carpenter, whose biographies of such figures as the composer Britten and the playwright Dennis Potter quickly established themselves as definitive.

Spike Milligan changed the face of British comedy--and many later comedians (notably the Monty Python team) would constantly reiterate their debt to him--and yet he died a bitter man, feeling neglected by the BBC (for which he had done such creative work) and seemingly unable to hear the voices of the younger comedians who sang his praises. For over 50 years, in every conceivable medium, Spike's quirky surrealistic humour made him among the best-loved of comedy talents in this country--and yet (it was remarked) he was best loved by those who didn't actually know him. His prickliness was legendary, and his career dissatisfaction, combined with the mental problems he suffered for most of his adult life, made it impossible for him to accept his considerable status in his field.

Drawing on Spike's own writing, Carpenter presents a picture of a fascinating and conflicted man. From his unsettling move as a child from India to a grey and cheerless England, Spike struggled with manic depression while still creating the much-loved Goon Show (with the equally troubled Peter Sellers). That period is faultlessly recreated here, along with Spike's acrimonious battles with his BBC bosses. Revealing new material tells us of the love affairs he conducted during his three marriages, and the children who were the results of those liaisons--these sections are among the most telling in painting a picture of a complex man. Whether you're interested in the history of British comedy or simply want to learn more about a fascinating writer and performer, you'll find Carpenter's biography riveting stuff. --Barry Forshaw

Carpenter gets to the heart of the gloomy monster. (Sunday Herald)

Carpenter's Milligan biography has some great comic riffs ...(this) very readable biography shows him at his most flawed and most human. (Guardian)

This biography delves deep behind the comic genius' many masks, exposing a depressed, self-centred and fascinating individual. (OK!)

In this definitive biography, Humphrey Carpenter demonstrates how Milligan was his own worst enemy... The beauty of Carpenter's biography is that this man of contradictions is laid before us in all his crazy glory. (Sunday Express)

Carpenter has made a very good job, scholarly and entertaining, of turning the adventures of one of Britain's strangest ever talents into a reliable narrative. (Word)

This experienced and genial biographer settles down into his familiar, businesslike style, unafraid of addressing the less savoury aspects of his subject. (Observer)

Takes us at a cracking pace through Milligan's war service, the Goon Show years, his literary career, and his attempts, largely unsuccessful, to repeat the mass appeal of The Goons ... It is all part of a complex personality that Carpenter has done well to grapple into a readable biography. (The Sunday Times)

as close a likeness as you will get. (Spectator)

Chronicles all Spike's antisocial and depressive behaviour with tremendous diligence. (Mail on Sunday)

A vivid picture of life at the Beeb when Spike was at his creative acme. Carpenter is good at describing the chemistry and backstage tension of The Goons, and the extracts from shows are well-chosen ...
Carpenter's elegant scissors-and-paste job will probably become the new standard text.