Items related to Lancashire and Cheshire, Past and Present, Vol. 1:...

Baines, Thomas Lancashire and Cheshire, Past and Present, Vol. 1: A History and a Description of the Palatine Counties of Lancaster and Chester, Forming the ... to the Present Time (1867) (Classic Reprint)

Lancashire and Cheshire, Past and Present, Vol. 1: A History and a Description of the Palatine Counties of Lancaster and Chester, Forming the ... to the Present Time (1867) (Classic Reprint) 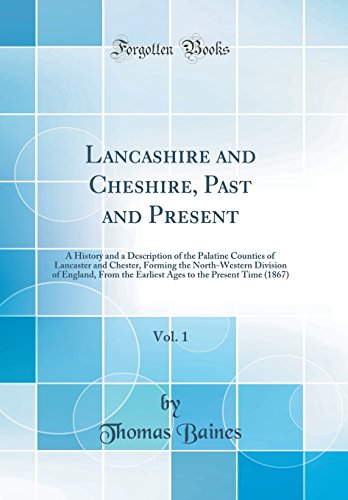 Excerpt from Lancashire and Cheshire, Past and Present, Vol. 1: A History and a Description of the Palatine Counties of Lancaster and Chester, Forming the North-Western Division of England, From the Earliest Ages to the Present Time (1867)

In preparing the introductory description of the Natural History of Lancashire and Cheshire, I have availed myself of the numerous papers published during the last forty years by the most eminent writers on the geology, the minerals, the agriculture, and the other branches of natural history connected with this part of England. Within that period the whole history of the Lancashire Coal - field has been written by Mr. Edward W. Binney, and other distinguished local geologists, with a clearness which has thrown newlight, not only on the history of the formation and the deposit of coal in this district, but also in other parts of the kingdom and in other countries. In the same period there have appeared new and original accounts of the Salt-field of Cheshire, the iron district of Furness, and of all the principal rocks, soils, and mineral products of the two Counties. Within the same period excellent accounts of the agriculture of Lancashire and Cheshire have been published in the Transactions of the Royal Society of Agriculture, as well as in local works. In preparing the description of the two Counties this information has been care fully condensed into a connected description of the natural history of the whole district.

It is also' within the same period that the railway system has grown up in Lancashire, and has extended throughout the whole kingdom, and that ocean steam navigation has connected the ports of the two Counties with almost every part of the Globe. The rise of these two great systems of communication has in that period brought the industry and the personal communications of this populous district into close connection with those of all parts of the United Kingdom, and of the whole world, and has given an impulse, both to industry and intercourse, that was entirely unknown in former times.

Within the same period the cotton manufacture, the greatest of all branches of manufacturing industry, has increased at least threefold, so as now to require a yearly supply of more than one thousand millions of pounds of cotton for the employment of the mills and looms of the two Counties. In the latter part of this period the cotton manufacture has passed through a season of the severest trial, owing to the Civil War in America, and the sudden and violent breaking up of the system of slave labour in the cotton districts of that country. But it has survived the terrible trials of that period; it has succeeded in drawing supplies of its raw material from numerous and distant countries; and it is freed from its dangerous dependence on a single source of supply, and on a description of labour which is rapidly disappearing before the progress of freedom and of justice. This great branch of industry has thus escaped from the principal perils which have long threatened its existence. The progress of this great change and its influence, both at home and abroad, will be carefully traced in this work, along with the history of the heroic patience with which the sufferings of the cotton district were borne, and of the noble generosity with which they were relieved.

1. Lancashire and Cheshire, Past and Present, Vol. 1

2. Lancashire and Cheshire, Past and Present, Vol. 1