Items related to Devil Take The Hindmost: A History of Financial Speculation

Devil Take The Hindmost: A History of Financial Speculation 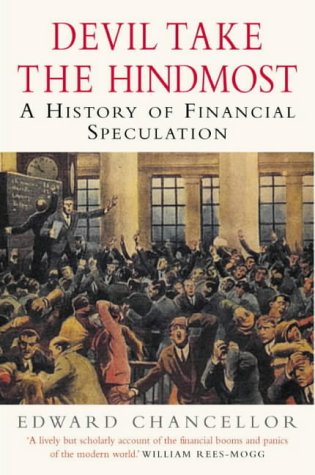 This is a history of financial speculation. From the 17th-century the beginning of the 21st century, Edward Chancellor takes the reader through accounts of the tulipomania of Holland - when tulip bulbs changed hands for the price of houses - through well-known British speculative manias, such as the South Sea Bubble and Railway Mania of Victorian times, and concludes that contemporary speculative mania is remarkably similar. This is a comprehensive book on the subject which should be of interest to investors, economists and anyone who wishes to acquire an understanding of the modern economic system, as well as mainstream historians.

"The longest bull market in history" is a term that gets used a lot these days. Since 1990, the Dow Jones Industrial Average has risen some 8,000 points, from around 2,700 in January 1990 to nearly 11,000 today--a boom by anyone's standards, including Edward Chancellor's. In Devil Take the Hindmost, Chancellor takes an entertaining, albeit sobering, look at the history of speculative manias and the mass delusion that surrounds them.

Beginning with the "tulipomania" that gripped Holland in the 1630s, Chancellor chronicles the formations and irrational euphoria that can inflate markets, from shares of South Sea stock in England in the 1720s to real estate in Japan in the late 1980s. He characterises the speculative spirit as one that loves freedom, detests cant and abhors restrictions. From the tulip colleges of the 17th century to the Internet investment clubs of the late 20th century, speculation has established itself as the most demonic of economic activities. Although profoundly secular, speculation is not simply about greed. The essence of speculation remains a utopian yearning for freedom and equality which counterbalances the drab rationalistic materialism of the modern economic system with its inevitable inequalities of wealth. But it is precisely such inevitability that always seems to win out, when "sharply rising prices followed by sudden panic without cause" bring speculative excess to an abrupt end. Highly recommended. --Harry C. Edwards

"The subtle ways in which individual investors become drawn into crowd behavior is a much studied phenomenon, covered brilliantly... in the book Devil Take the Hindmost."--The Daily Telegraph (London)

"The South Sea Company is one of the great bubble and crash stories. Many books have referred to it. One of the finest is Devil Take the Hindmost."--Debashis Basu, Money Life

"A lively history of speculative manias and bubbles by a British banker turned writer."--Susan Adams, Forbes