Items related to The Stranger's Child 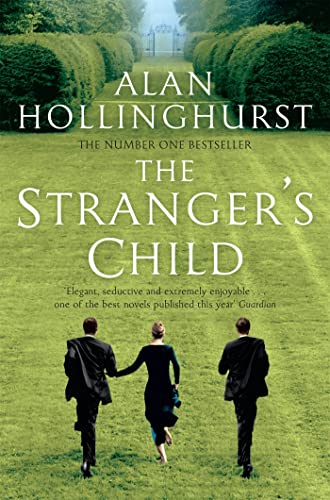 The Sunday Times Novel of the Year

With The Stranger s Child, an already remarkable talent unfurls into something spectacular Sunday Times

In the late summer of 1913, George Sawle brings his Cambridge friend Cecil Valance, a charismatic young poet, to visit his family home. Filled with intimacies and confusions, the weekend will link the families for ever, having the most lasting impact on George s sixteen-year-old sister Daphne.

As the decades pass, Daphne and those around her endure startling changes in fortune and circumstance, reputations rise and fall, secrets are revealed and hidden and the events of that long-ago summer become part of a legendary story, told and interpreted in different ways by successive generations.

Powerful, absorbing and richly comic, The Stranger s Child is a masterly exploration of English culture, taste and attitudes over a century of change.

I would compare the novel to Middlemarch . . . a remarkable, unmissable achievement Independent

Magnificent . . . universally acclaimed as the best novel of the year Philip Hensher

'Hollinghurst's follow-up to The Line of Beauty, his 2004 Man Booker-Prize winner, is still several months away, but advance word suggests another classic. Following the lives of two families from the eve of WW1 to the close of the 20th century, it promises to be hugely ambitious, deeply affecting and beautifully written. If it's not, we'll eat your copy.' --GQ

'An epic story of two families and two houses spanning the entire 20th century, it promises to enhance its author's claim to the title of best British novelist working at the moment.' --Observer News Review 2011 Preview

'I'm particularly looking forward to the first novel in seven years from Alan Hollinghurst, and the word on the street is that it's every bit as compelling as The Line of Beauty' --Mariella Frostrup, `Stylist' (her number One choice for `2011's Essential Reading')

'Hollinghurst is promising a huge novel for the summer, a tale of two families that ranges from 1913 to the late Noughties.' --Sunday Times 2011 Preview

'I'll definitely be taking Alan Hollinghurst's The Stranger's Child, which spans several generations, no doubt in his usual impeccable prose' James Walton
'I'll be packing a copy of Alan Hollinghurst s The Stranger s Child. That's partly because he s the finest prose stylist of his generation, but also because his writing sits so invitingly between the intellectually risky and the sexually risqué' Robert Douglas-Fairhurst
'I loved The Line of Beauty and The Swimming-Pool Library so I am very much looking forward to Alan Hollinghurst s The Stranger's Child, which promises to match his earlier books in both elegance of prose and acuity of psychological insight' Michael Gove --Daily Telegraph's Summer Reading

An intricate, witty, playful meditation on what is now beginning to emerge as one of Hollinghurst s chief concerns: Englishness. Comedy of manners, investigation of class, changing political and social landscape all the reliable pleasures that his fiction offers are here in their dense, detailed richness.... Miraculously handled Hollinghurst set-pieces... It is woven with stupendous deftness, its internal assonances making a complex, comprehensive harmony... A magnificent coherence The Times
Masterful... There is a huge cleverness to the book at a structural and, as it were, managerial level. Characters are named with an aptness which is light-footed and unswervingly accurate... Hollinghurst, as ever, is quietly brilliant about architecture, both in the specific sense of a cultural discourse about buildings, and the broader sense of how people behave in different kinds of place... there is something symphonic about [the novel s] wholeness. There is also something filmic in the book s enveloping embrace; not the heritage cinema of Merchant Ivory et al, but the more experimental, argumentative efforts of the Sixties and Seventies. I often found myself recalling Joseph Losey's version of The Go-Between, and occasionally the anguished exquisites of Michelangelo Antonioni... there s also a lot that is purely and simply very funny Daily Telegraph 4-star review
A showcase for bravura writing. Such praise could be off-putting: the glitter of fine writing often elevates style over substance. Perhaps I should therefore stress straight away that The Stranger s Child is not only written with extraordinary beauty, but is also exceptionally readable and this even though the narrative is fragmented by chronological leaps, the characterisation disrupted by shifts in perspective. The author s imagination is teased by the extent to which we are strangers to each other, and the way in which the past becomes strange to the present. His genius lies in his ability to intrigue the reader, too, suggesting the hinterland of a secret, vivid life, glimpsed out of the corner o --Irish Times

'Brilliantly written, intricate... Marvellously acute in its attention to idioms and idiosyncracies, psychological and emotional nuances, the book gives intensely credible life to its swarm of characters. Masterly in its narrative sweep and imaginative depth, this novel about Cecil s increasingly threadbare literary reputation enormously enhances Hollinghurst s own. With The Stranger s Child, an already remarkable talent unfurls into something spectacular --The Sunday Times, Paperback of the Week

'A big, long, absorbing novel that one can get wrapped up in while the outside world goes about its business... Written in prose that s lush, tastefully ornate and as easy to get lost in as the corridors of Cecil s family seat, The Stranger s Child is also graced with a sensuality that s far subtler than Hollinghurst s earlier, more explicit work. It s a change of direction for the author, but one in which he s emerged triumphant' --Herald, Paperback of the Week

'The Stranger s Child is a treasure: few contemporary novels show equal care at the level of structure and line. Sex, war, class, literature, Englishness little is untouched as it sweeps through the 20th century. What better to read over the Jubilee' --The Times

'The first 105 pages are a preternaturally vivid and deliciously readable evocation of Edwardian Britain, which might have been written by E M Forster or Ford Madox Ford... The next section is an equally vivid evocation of Britain in the 1920s; and the next section, Britain in the 1960s; and so on, up to 2008... A novel about time, and change, and art, and sex, and death which is also as light as a soufflé. It s clever, subtle, melancholy and amusing at the same time. I know it s a reviewer s cliché, but I actually did miss my stop on the Tube while reading this' --Independent on Sunday

'Changing social, sexual and cultural attitudes all contribute but it s the disturbingly insouciant Cecil who drives this excellent novel' --The Lady

'A beautifully told story of love and loss by one of the most highly regarded authors in the country' --Novel of the Week, Suffolk Free Press

'The book is a feat of virtuosity'
--Irish Times

The UK number one hardback bestseller from the Man Booker Prize-winning author of The Line of Beauty: a magnificent, century-spanning saga about a love triangle that spawns a myth, and a family mystery, across generations.

Book Description Picador, 2012. Paperback. Condition: New. Paperback. Alan Hollinghurst's first novel since The Line of Beauty, winner of the 2004 Man Booker Prize It is the late summer of the last year before the first Great War. Cecil Valance, a beautiful .Shipping may be from multiple locations in the US or from the UK, depending on stock availability. 576 pages. 0.400. Seller Inventory # 9780330483278

Book Description Picador, 2012. Paperback. Condition: New. UNUSED, BRAND NEW, NOT EX-LIBRARY, 576 pages. The stranger's child is Cecil Valance, who comes in 1913 as a visitor to Two Acres, home of the widowed Freda Sawle and her three children. The middle child, George, brings Cecil from Cambridge, where the two are members of the Apostles, an intellectual club-cum-debating society with a strong homosexual component to its membership. Cecil's family is from a higher social class -- his home Corley Court is quite grand in Victorian Gothic manner -- and he is a budding poet who, while at Two Acres, writes a poem in the autograph book of Daphne Sawle that becomes a "classic" of pre- WW1 England in something of the manner of Rupert Brooke's "If I should die . . ." (Brooke is mentioned, as is Lytton Strachey, as Apostles known, though not well, to Cecil and George). But Cecil is the stranger's child in another sense -- after his death in battle in 1916, and after his poems become better known, he becomes in effect the child of strangers, people in later generations who for aesthetic, economic, and sexual reasons are fascinated by his story. The final section of the book, set early in the 21st Century, shows him still an object of fascination. He is, however, never pinned down; he remains a mystery to the end. In the opening section -- the only one in which he is alive -- we are given no access to his inner life. All we know of him we have to infer from the reactions of the Sawle household. "The stranger's child" is also a phrase from Tennyson's "In Memoriam" (T. had also been an "Apostle"), and the section of the poem in which it appears is read by Cecil in the first section of the book. It's no accident that it is by far more powerful and moving than anything that Cecil manages in the way of poetry, and it foreshadows the fate of Two Acres and of Cecil himself. 482. Seller Inventory # 10339

Book Description Pan Macmillan, 2012. Paperback / softback. Condition: New. New copy - Usually dispatched within 4 working days. The UK number one hardback bestseller from the Man Booker Prize-winning author of The Line of Beauty: a magnificent, century-spanning saga about a love triangle that spawns a myth, and a family mystery, across generations. Seller Inventory # B9780330483278