Items related to A Call To Conscience: The landmark speeches of Dr Martin...

A Call To Conscience: The landmark speeches of Dr Martin Luther King Jr. 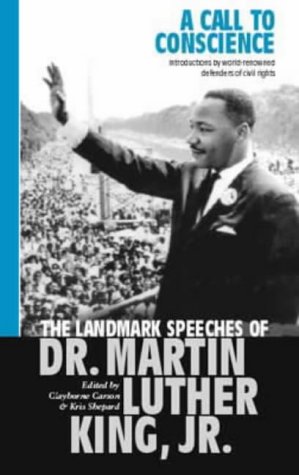 Dr. Martin Luther King, Jr., is known for being one of the greatest orators of the 20th Century, and perhaps in all of American history. In the 1950s and 1960s, his words led the Civil Rights movement and helped change society. Although he is best-known for helping achieve civil equality for African Americans, these speeches show that his true goal was much larger than that: he hoped to achieve acceptance for all people, regardless of race or nationality.This volume features the landmark speeches of his career including: I Have a Dream; his acceptance speech for the Nobel Peace Prize; Beyond Vietnam, a powerful plea to end the conflict; and his eulogy for the young victims of the Birmingham church bombing. Though the speeches refer to the conditions of the 1960s, his assertions that non violent protest is the key to democracy and that all humans are equal, are as timeless and powerful today as they were nearly forty years ago. Also featured in this text are introductions from world-renowned defenders of civil rights.

* Timeless, inspiring and universal words of wisdom, this collection features the milestone speeches, including 'I have a dream....', of Dr. Martin Luther King, Jr., one of the greatest orators of the 20th Century

Clayborne Carson, Ph.D., is the author and editor of several books on the civil rights struggle in the U.S.

1. A Call To Conscience: The landmark speeches of Dr Martin Luther King Jr.

2. A Call To Conscience: The landmark speeches of Dr Martin Luther King Jr.

Book Description Hardback. Condition: Very Good. The book has been read, but is in excellent condition. Pages are intact and not marred by notes or highlighting. The spine remains undamaged. Seller Inventory # GOR001857943

3. A Call To Conscience: The landmark speeches of Dr Martin Luther King Jr.

Book Description Hardback. Condition: Good. The book has been read but remains in clean condition. All pages are intact and the cover is intact. Some minor wear to the spine. Seller Inventory # GOR004170092