Items related to Red Carpets and Other Banana Skins

Red Carpets and Other Banana Skins 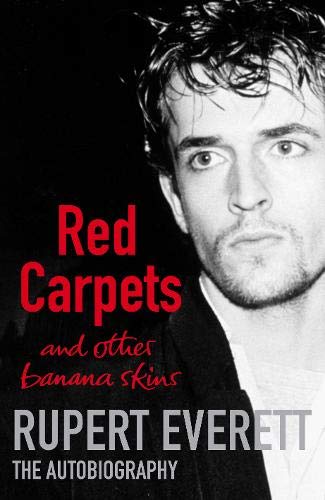 An element of drama has always attended Rupert Everett, even before he swept to fame with his outstanding performance in 'Another Country'. He has spent his life surrounded by extraordinary people, and witnessed extraordinary events. He was in Moscow during the fall of communism; in Berlin the night the wall came down; and in downtown Manhattan on September 11th. By the age of 17 he was friends with Andy Warhol and Bianca Jagger, and since then he has been up close and personal with some of the most famous women in the world: Julia Roberts, Madonna, Sharon Stone and Donatella Versace.

Whether sweeping the floor for the Royal Shakespeare Company or co-starring with Faye Dunaway and an orang-utan in 'Dunstan Checks In' (they both took ages to get ready), Rupert Everett always brings as much energy and talent to his life as he does to his career. His memoir swoops from the eccentricities of the British upper classes to the madness of Hollywood, from the Russian steppes to an Easter egg hunt in Elizabeth Taylor's garden.

Rupert Everett is one of Britain's most admired actors (as well as being one of the most lusted after -- the fact that he has made no secret of being gay has hardly dented his female fan base). But he is also one of our most liked actors, and the reason for that is simple to discern. As his charming (and often hilarious) memoir, Red Carpets and other Banana Skins proves, he is not given to the self-important, self-aggrandising manner of so many actors (notably those in Hollywood). And, in fact, his winningly self-deprecating manner is reminiscent of an earlier generation of British actors, such as David Niven. It's not surprising that Red Carpets and other Banana Skins has invoked favourable comparisons with Niven’s classic autobiography The Moon’s A Balloon.

Theatrical/showbiz memoirs need to be frank and candid, without too many worries about decorum (the actor John Mills’ autobiography some years ago was so anodyne in this respect that many readers yearned for a little unbuttoned candour along with all the praising of famous colleagues -- but there need be no such caveats for Rupert Everett). Everett’s descriptions of working with such stars as Julia Roberts, Sharon Stone and Madonna are hilarious and revealing (with some side-splitting anecdotes), and his book is equally diverting when dealing with the author’s chaotic childhood and adolescence. Actors from an earlier generation -- Niven (as mentioned above) and Dirk Bogarde -- showed that certain thespians could be just as adroit as writers as they were in front of the camera or on stage. To their illustrious (but small) number, Rupert Everett's name may now be honourably added. --Barry Forshaw

You don't need to be a soothsayer to know that, amidst the volcanic spew of fourth-rate celebrity memoirs launched this autumn, only one will be worth the paper it's printed on. I was salivating over my toast and marmalade at last week's serialisation of Rupert Everett's exemplary stab at the genre, Red Carpets and Other Banana Skins (Rowan Pelling, INDEPENDENT ON SUNDAY)

Hilariously honest. . . a kind of rake's progress. The accounts of filming with stars such as Madonna, Sharon Stone and Julia Roberts are as good as Evelyn Waugh. The earlier scenes from childhood to unruly adolescence, to drama school and a belle epoque (DAILY MAIL)

The most keenly awaited celebrity autobiography is Rupert Everett's RED CARPETS AND OTHER BANANA SKINS, an urbane charmer in the manner David Niven's THE MOON'S A BALLOON (John O'Connell's, TIME OUT)

Lush, profoundly reflective, and thoroughly satisfying autobiography . . . Definitely several cuts above the conventional showbusiness memoir, laced with quirky insights and dazzling phrases it reads like a lurid dream, recalled in deliciously acute deta ('You'll enjoy the hectic energy of Everett's engagement with the beautiful and the damned . . . it's impossible to begrudge Rupert his repetitive ecstasies when the result is a book as glowingly resplendently alive, as beautifully written and as damnably)

2. Red Carpets and Other Banana Skins