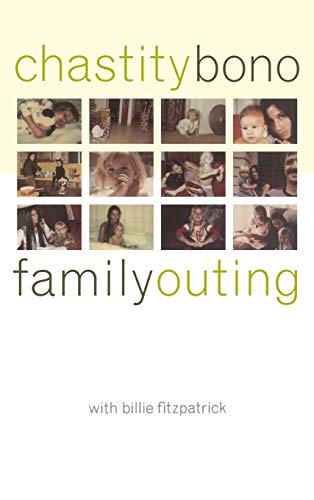 Chastity Bono grew up in the spotlight cast on her parents, but nothing could have prepared her for the events of December 1990, when the tabloid newspaper the Star outed her to the world. Out at that time only to her family and close friends, the shock of that public revelation drove Chastity back into the closet. Coming out to her family had been difficult, and four years passed before Chastity decided, with both of her parents' blessing, to come out publicly on her own terms -- and to unexpected acclaim -- on the cover of The Advocate. But the arduousness of her own experience had revealed to Chastity the need for a book that could guide gays and lesbians and their families through the minefield of the coming-out process. In Family Outing, Chastity weaves her story into those of other gays and lesbians of diverse ethnic and economic backgrounds to illustrate and advise about the phases, pitfalls, and rewards of coming out. She also relates Cher's side, along with the experiences of other parents of gays and lesbians, so that parents will be able to turn to the book for advice and support.

Family Outing is two books in one: a memoir of Chastity Bono's experience coming out as a lesbian to her famous parents and a look at the difficulties and triumphs that are part of every uncloseted homosexual's family life, with narratives drawn from interviews with members of Parents and Friends of Lesbians and Gays (PFLAG). Sometimes the two projects work against each other, but for the most part, Bono is right in assuming that her story reflects something larger in the culture and that others' stories, in turn, bear on her own experience. Readers skimming for intimate details about the mother-daughter conflict between Cher and Chastity won't be disappointed by Bono's sensitively written account. For a long time, Cher overlooked the troubling evidence of her daughter's emerging sexual identity: "Instead, she focused on superficial issues that bothered her: my short hair, my mannish clothes, my weight." Their relationship deteriorated and it was Sonny to whom Chastity eventually confided; ironically, the father who offered immediate, warm acceptance of his daughter's lesbianism would later sponsor the "1996 Defense of Marriage Act" in the US House of Representatives. -- Regina Marler, Amazon.com

A self-help book for parents and teens-to-early-twenties on coming out.