Items related to Qatar: Devlopment of an Oil Economy

Qatar: Devlopment of an Oil Economy 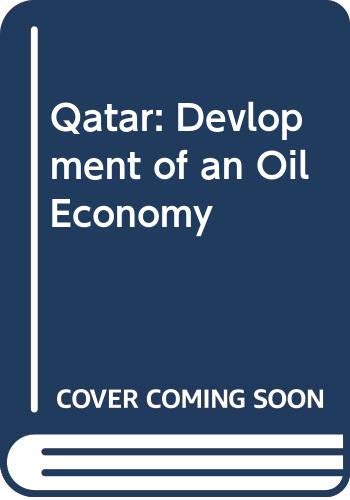 No region in the world has seen so much development activity in the last ten years as the Gulf area. Since ‘black gold’ catapulted the oil-producing countries into the limelight of the international political and economic scene, there has been a proliferation of studies on the larger exporting states. However, many of the so-called ‘small countries’ have been neglected in this exercise. This book presents the first detailed examination of the bases and extent of economic development in Qatar and considers the need to translate the petroleum-generated growth into viable, self-sustained development. Qatar, though not one of the oil ‘giants’, was first in the field of oil development and exhibits a number of special features not shared by its Gulf neighbours: for example in pre-oil boom days it was already in advance of many other Gulf states in the field of education; it has a modest agriculture sector and there is a comparatively strong attachment to the land; and finally it has played an important role in OPEC as a member of the ‘moderate price’ camp. The individual chapters trace the development of the oil industry, outline public financing and economic policy and sketch the issues involved in industrialisation, absorptive capacity and agricultural development. Examination is made of the social and physical infrastructure as well as money and banking, and the international linkages in trade, foreign aid, economic cooperation efforts and investment opportunities are elucidated. Planners in Qatar know that their revenue base in petroleum is finite, and thus investment of present surplus needs careful planning. The book therefore also outlines current government priorities and suggests areas for future investments.

1. Qatar: Development of an Oil Economy

2. Qatar: Development of an Oil Economy

Book Description Palgrave Macmillan, 1979. Condition: Good. Former Library book. Shows some signs of wear, and may have some markings on the inside. Seller Inventory # GRP63100981

3. Qatar: Development of an Oil Economy

Book Description Palgrave Macmillan, 1979. Condition: Good. A+ Customer service! Satisfaction Guaranteed! Book is in Used-Good condition. Pages and cover are clean and intact. Used items may not include supplementary materials such as CDs or access codes. May show signs of minor shelf wear and contain limited notes and highlighting. Seller Inventory # 031265751X-2-4

4. Qatar: Development of an Oil Economy

5. Qatar: Development of an Oil Economy