Items related to Quantum Physics and Theology: An Unexpected Kinship 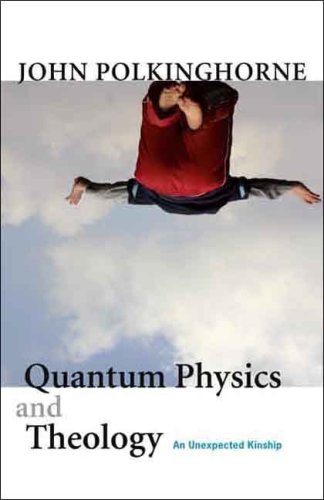 Quantum Physics and Theology Despite the differences of their subject matter, science and theology have a cousinly relationship, John Polkinghorne contends in his latest thought-provoking book. From his unique perspective as both theoretical physicist and Anglican priest, Polkinghorne considers aspects of quantum physics and theology and demonstrates that the two truth-seeking enterprises are engaged in analogous rational tec... Full description

"A model of conceptual clarity."--Commonweal
"Although the book is intended for nonspecialists, Polkinghorne's own expertise shines through in the quiet confidence with which he cites examples to back his main theses. . . . Quantum Physics and Theology helps to counteract the stereotype that comes up all too often in religion and science controversies: Science has to do with indubitable truths while religion is nothing more than speculation, personal opinion, or uncritical acceptance of tradition."--Robert B. Griffiths, Physics Today
"When John Polkinghorne writes on the intersection of science and religion, one pays attention."--Anthony L. Blair, Perspectives on Science and Christian Faith
"It is a highly readable book, appropriate for use in undergraduate courses on religion and science. . . . The book is an important contribution to the dialogue between Christian theology and physics."--Yiftach J. H. Fehige, American Catholic Philosophical Quarterly
"Polkinghorne explores the underlying truth-seeking connection between science and religion and executes this task with a rare blend of precision and clarity."--Nathan J. Hallanger, The Center for Theology and the Natural Sciences, Graduate Theological Union, Berkeley
"Polkinghorne's life project is to show that science and religion are two rational structures between which there are significant homologies. It is most fascinating in Quantum Physics and Theology to observe him demonstrate this thesis."--Miroslav Volf, Yale Divinity School

John Polkinghorne, KBE, FRS, is fellow and retired president, Queens' College, Cambridge University. He was founding president of the International Society for Science and Religion and in 2002 was awarded the Templeton Prize. He is the author of many books, including the following published by Yale University Press: Exploring Reality: The Intertwining of Science and Religion; Science and the Trinity: The Christian Encounter with Reality; The God of Hope and the End of the World; and Belief in God in an Age of Science.

Book Description Yale University Press, United States, 2008. Paperback. Condition: New. Language: English. Brand new Book. Despite the differences of their subject matter, science and theology have a cousinly relationship, John Polkinghorne contends in his latest thought-provoking book. From his unique perspective as both theoretical physicist and Anglican priest, Polkinghorne considers aspects of quantum physics and theology and demonstrates that the two truth-seeking enterprises are engaged in analogous rational techniques of inquiry. His exploration of the deep connections between science and Christology shows with new clarity a common kinship in the search for truth. Among the many parallels he identifies are patterns of historical development in quantum physics and in Christology; wrestling with perplexities such as quantum interpretation and the problem of evil; and the drive for an overarching view in the Grand Unified Theories of physics and in Trinitarian theology. Both theology and science are propelled by a desire to understand the world through experienced reality, and Polkinghorne explains that their viewpoints are by no means mutually exclusive. Seller Inventory # BZV9780300138405

6. QUANTUM PHYSICS AND THEOLOGY: AN