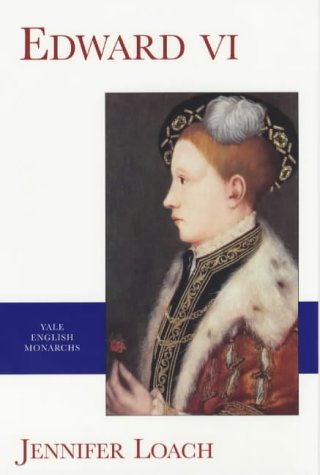 Edward VI was the son of Henry VIII and his second wife, Jane Seymour. He ruled for only six years (1547-1553) and died at the age of sixteen. But these were years of fundamental importance in the history of the English state, and in particular of the English church. This new biography reveals for the first time that, despite his youth, Edward had a significant personal impact. Jennifer Loach draws a fresh portrait of the boy king as a highly precocious, well educated, intellectually confident, and remarkably decisive youth, with clear views on the future of the English church. Loach also offers a new understanding of Edward's health, arguing that the cause of his death was a severe infection of the lungs rather than tuberculosis, the commonly accepted diagnosis. The author views Edward not as a sickly child but as a healthy and vigorous boy, devoted to hunting and tournaments like any young aristocrat of the day. This book tells the story of the monarch and of his time. It supplies the dramatic context in which the short reign of Edward VI was played out-the momentous religious changes, factional fights, and popular risings. And it offers vivid details on Edward's increasing absorption in politics, his consciousness of his role as supreme head of the English church, his determination to lay the foundation for a Protestant regime, and how his failure in this ambition brought England to the brink of civil war.

"Edward VI has to be valued as an early step on a challenging historical journey..." -- Stephen Alford, Times Literary Supplement

"Essential reading ... Loach draws on considerable unpublished research by other scholars and brings her own valuable insights to many issues." -- Choice

"Jennifer Loach presents a substantially fresh portrait of the boy king. Far from being the sickly child of traditional history, he is depicted as a typical young aristocrat of his day, interested in hunting, tournaments and warfare, healthy and vigorous up to his final months. The cause of Edward's early death is here diagnosed as the consequence of a severe and rapid infection of the lungs, rather than the gradual process of tuberculosis."--BOOK JACKET. "The book explores Edward's life as prince and later king, analysing the events and politics of the time and the context of the royal court in his upbringing and his rule. It considers the extent to which the young king was himself involved in matters of state and assesses the governments of Edward Seymour, duke of Somerset, and of John Dudley, duke of Northumberland, both of whom ruled in his name. Loach questions the image of Edward as the 'godly imp' portrayed in John Foxe's Book of Martyrs, and advances the view that he was more concerned with obedience to his authority than with detailed points of doctrine."--BOOK JACKET. "This important and original book transforms our understanding of a dramatic period of British history, marked by political volatility, religious change and social unrest, and throws new light on an age often neglected by historians."--BOOK JACKET.