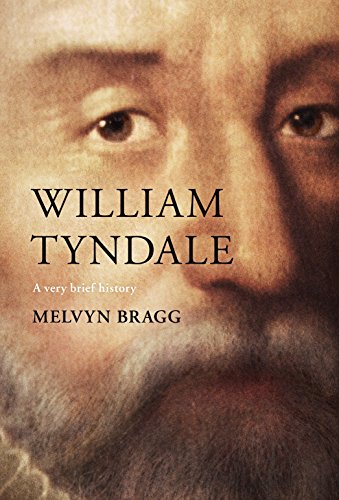 'On the morning of 6 October 1536, a frail scholar was taken from a dungeon in the castle at Vilvoorde, just north of Brussels. Armed guards kept the crowds at bay as he was led through the streets of the small town. He was to be burned. The funeral pyre, a wigwam stack of planks surmounted by a cross, was ready. Gunpowder would be thrown on the wood to encourage the flames. He was allowed a few moments of prayer. As a priest, prayer had been the keystone of his faith. After the brief pause, he walked up the steps to be tied to the cross. As he waited for the flames, he called out, "Lord, open the King of England's eyes!"

'This was William Tyndale, the man whose translation of the New Testament and much of the Old Testament was to bring about more profound changes to the English-speaking world over the next five centuries than the works of any other man in its history.'From Chapter 1: Innocence and genius

William Tyndale is the only writer in the English language more influential than William Shakespeare. Melvyn Bragg, with his unique view of the broad sweep of social and cultural history, understands this in all its many dimensions. He succinctly lays out the details of Tyndale's life, achievements and legacy, and vividly shows us the man's genius, his passion and his "heroic innocence" in the face of Henry VIII's tyranny. Thus he humanizes the story of the English and their Bible. In short, it is one of the greatest stories of individual sacrifice for the greater good in the history of the world. Source: Dr Ian Mortimer FSA, FRHistS, historian and writer

It's is a terrific read, and really hits the spot - everything the non-specialist needs to know in a readily accessible format. Source: John Guy

Bragg has established himself over the past decades as a fearlessly dedicated, popular educator. Source: The Sunday Times

Melvyn Bragg is a writer and broadcaster. His novels includeThe Hired Man, for which he won the Time/Life Silver Pen Award, Without a City Wall, winner of the John Llewellyn Rhys Prize, The Soldier's Return, winner of the W H Smith Literary Award, A Son of War and Crossing the Lines, both of which were longlisted for the Man Booker Prize, and most recently Grace and Mary and Now is the Time. He has also written several works of non-fiction, including The Book of Books, In Our Time, The Adventure of English and 12 Books that Changed the World. He lives in London and Cumbria.

Book Description SPCK Publishing, United Kingdom, 2018. Hardback. Condition: New. Language: English. Brand new Book. Part One: The History (What do we know?)This brief historical introduction to William Tyndale explores the social, political and religious factors that formed the original context of his life and writings, and considers how those factors affected the way he was initially received. What was his impact on the world at the time and what were the key ideas and values connected with him?Part Two: The Legacy (Why does it matter?)This second part explores the intellectual and cultural `afterlife' of William Tyndale, and considers the ways in which his impact has lasted and been developed in different contexts by later generations.Why is he still considered important today? In what ways is his legacy contested or resisted? And what aspects of his legacy are likely to continue to influence the world in the future? The book has a brief chronology at the front plus a glossary of key terms and a list of further reading at the back. Seller Inventory # ASC9780281077137