Items related to When Elephants Weep: Emotional Lives of Animals 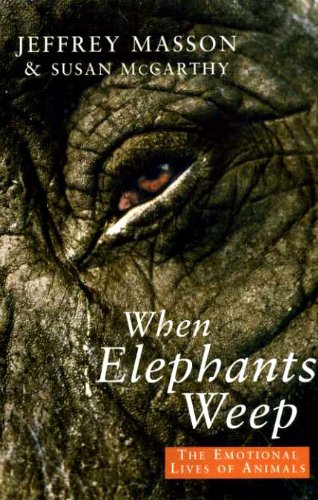 This work constitutes an attack on the taboo in the world of science on anthropomorphism, which ignores the evidence for the existence of animal emotions. The authors include evidence from such researchers as Dian Fossey, Jane Goodall and Charles Darwin.

"A masterpiece... The most comprehensive and compelling argument for animal sensibility that I've yet seen" (Elizabeth Marshall Thomas)

"Among animal experts, When Elephants Weep is being hailed as a milestone in the battle to make man understand he is only one member of an enormous family" (George Gordon Daily Mail)

From dancing squirrels to bashful gorillas and spiteful killer whales, When Elephants Weep fascinates, provokes and will change the way you think about animals

Book Description Hardback. Condition: Very Good. The book has been read, but is in excellent condition. Pages are intact and not marred by notes or highlighting. The spine remains undamaged. Seller Inventory # GOR001147361

Book Description Jonathan Cape Ltd, 1994. Hardcover. Condition: Used; Good. **Simply Brit** Shipped with Premium postal service within 24 hours from the UK with impressive delivery time. We have dispatched from our book depository; items of good condition to over ten million satisfied customers worldwide. We are committed to providing you with reliable and efficient service at all times. Seller Inventory # mon0001609628

Book Description Jonathan Cape. Condition: Good. Your purchase helps support Sri Lankan Children's Charity 'The Rainbow Centre'. Shows some signs of wear but in good overall condition. Our donations to The Rainbow Centre have helped provide an education and a safe haven to hundreds of children who live in appalling conditions. Seller Inventory # Z1-C-039-00961

6. When Elephants Weep: The Emotional Lives of Animals

7. When Elephants Weep : The Emotional Lives of Animals