Items related to Epidemics: Hate and Compassion from the Plague of Athens...

Cohn Jr., Samuel K. Epidemics: Hate and Compassion from the Plague of Athens to AIDS

Epidemics: Hate and Compassion from the Plague of Athens to AIDS 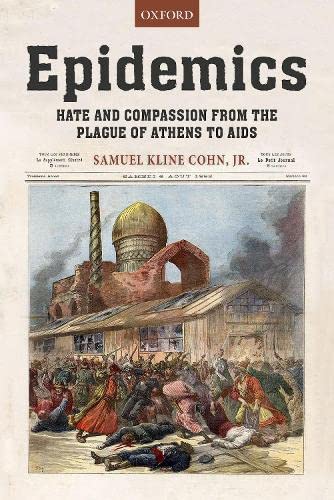 By investigating thousands of descriptions of epidemics reaching back before the fifth-century-BCE Plague of Athens to the distrust and violence that erupted with Ebola in 2014, Epidemics challenges a dominant hypothesis in the study of epidemics, that invariably across time and space, epidemics provoked hatred, blaming of the 'other', and victimizing bearers of epidemic diseases, particularly when diseases were mysterious, without known cures or preventive measures, as with AIDS during the last two decades of the twentieth century.

However, scholars and public intellectuals, especially post-AIDS, have missed a fundamental aspect of the history of epidemics. Instead of sparking hatred and blame, this study traces epidemics' socio-psychological consequences across time and discovers a radically different picture: that epidemic diseases have more often unified societies across class, race, ethnicity, and religion, spurring self-sacrifice and compassion.

Epidemics, conceived in the influenza scare of 2009, is in itself a commemoration of all the deadliest plagues to have afflicted our species. ... covering the major infections from 430 BC, through the Black Death (134751) and syphilis (14945), to cholera (1832 onwards), smallpox in nineteenth-century America, plague in India since 1894, yellow fever (Southern USA), and the Great Influenza, with a coda on HIV/AIDS ... Cohn's aim is not just to tell their stories (although there are stories aplenty), but to tell them from a new perspective. (Anne Hardy, Times Literary Supplement)

The historical breadth of this book, with its meticulous attention to varied sources and contexts, is simply breathtaking. ... This book will interest students of the history of medicine as well as anyone seeking a historical and comparative exploration of epidemics. It is dense and detailed reading ... this book will appeal chiefly to specialists at the graduate level and above. (CHOICE)

Samuel K. Cohn, Jr. is Professor of Medieval History at the University of Glasgow, an Honorary Fellow of the Institute for Advanced Studies in Humanities at the University of Edinburgh, and a Fellow of the Royal Society of Edinburgh. Over the past sixteen years, he has focused on the history of popular unrest in late medieval and early modern Europe and on the history of disease and medicine. Cohn's latest two books are Popular Protest in Late Medieval English Towns (2013) and Cultures of Plague: Medical Thinking at the End of the Renaissance (OUP, 2010).

2. Epidemics: Hate and Compassion from the Plague of Athens to AIDS