Items related to A Book of Homage to Shakespeare 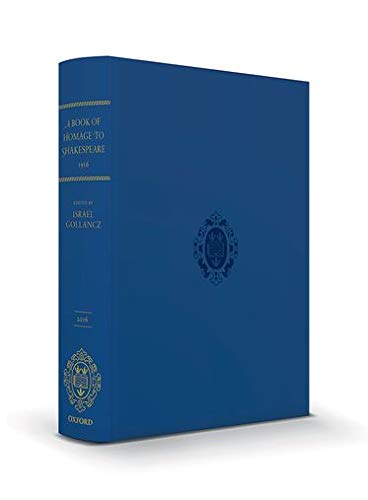 On 23 April 1916, Oxford University Press published a magnificent volume entitled A Book of Homage to Shakespeare, edited by Professor Israel Gollancz. Created to mark the Tercentenary of Shakespeare's death in the very midst of the First World War, it was a substantial folio-sized volume of 557 pages bound in white leather with Shakespeare's coat of arms embossed in gold, with nine leaves of plates, each protected by tissue: with textured pages laid out with a generous and elegant text design, it is a strikingly beautiful material object in its own right, quite apart from its contents, which include contributions by writers from Rudyard Kipling to Rabindranath Tagore, from John Galsworthy to Maurice Maeterlinck.

One thousand two hundred and fifty copies were printed, a fifth designed as presentation copies, with the rest put on general sale. Within its pages, sandwiched between an opening poem by Thomas Hardy about Stratford-upon-Avon and the London-based editor's closing paean to the global community― 'Shakespeare's own kindred, whatsoe'er their speech'―are a hundred and five essays, dialogues and fragments and sixty-one poems, including twenty-six translations, from locations as far apart as India, Ireland, America, Armenia, Burma, South Africa, Russia and Japan. A Book of Homage to Shakespeare is thus a celebration both local and global, and it marks a pivotal moment in literary history―a moment at which Shakespeare was the poet both of empire and of a world emerging into a new, very different global order.

Oxford University Press's reissue, 100 years later, of this remarkable volume for the 2016 centenary reflects the style of the original edition and is presented with a new foreword by King's College London's Gordon McMullan, telling the story of the book's inception and creation, focussing on its editor and guiding spirit, Israel Gollancz, and on certain key contributions. His lively account reveals A Book of Homage as a far more complex phenomenon than might be expected, balancing the celebration of empire with elements both of resistance to Shakespeare as the uncontested figurehead for empire and of self-fashioning, implicit and explicit, on the part of its contributors.

Sir Israel Gollanz was a literary scholar and chair of English language and literature at King's College, London from 1903 until 1930. He was also one of the founders and original fellows of the British Academy. Gollancz was the general editor of the Temple Shakespeare, the Temple Classics, the King's Library, the King's Novels, the Medieval Library, and the Shakespeare Survey. Gollancz won wide recognition for his scholarship both at home and abroad, and was knighted in 1919. He died at his home in June 1930. Gordon McMullan is Professor of English at King's College London and Director of the London Shakespeare Centre. He is a critic and an editor with a focus on Shakespeare and early modern drama. He is a general editor of the Arden Early Modern Drama series and author of Shakespeare and the Idea of Late Writing: Authorship in the Proximity of Death.

1. A Book of Homage to Shakespeare