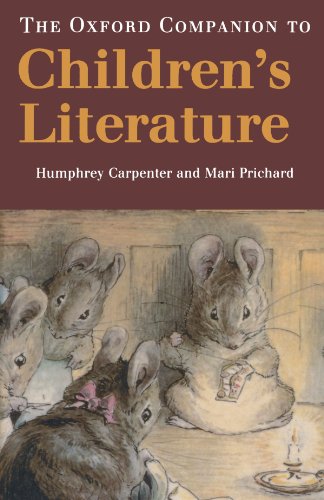 Dig into almost 2,000 entries in this bulging resource, where Anne of Green Gables rubs elbows with the Lord of the Rings, Mother Goose with Punch and Judy, Hans Christian Andersen with Christina Rossetti, and Maurice Sendak with Kate Greenaway. It's thorough - and indispensable for teachers, librarians, and parents.

The indispensable reference book for anyone concerned with children's books. Over 900 biographical entries deal with authors, illustrators, printers, publishers, educationalists, and others who have influenced the development of children's literature. The range of literature covered includes traditional narrative materials such as legends as romances; fairy tales; chapbooks; genres such as school stories, adventure stories, doll stories, and science fiction; ABC and other learning books; children's magazines, comics, and story papers; picture books; teenage novels; children's hymns; and children's stories on radio television and film. Other entries include: concise plot summaries, from familiar favourites like The Secret Garden to less well-known works such as My Friend Mr Leaky by the eminent scientist J. B. S.

Haldane; characters, Andy Pandy to Tiger Tim, Captain Nemo to Shere Khan and Winnie-the-Pooh; literary and historical background, Puritans and penny dreadfuls, libraries and reviewers, racism and sexism; mythical and legendary creatures, trolls, dragons, witches, giants, dwarfs, and goblins; national surveys, including the USA, Germany, France, Italy, Denmark, Iceland, Canada, Australia, and India. Written both to entertain and instruct, The Oxford Companion to Children's Literature is a reference work no one interested in the world of children's books should be without. About the Author:

Humphrey Carpenter's books include biographies of J. R. R. Tolkien, W. H. Auden, C. S. Lewis, Ezra Pound, and Benjamin Britten. He is the author of the popular Mr. Majeika series of stories for children. Mari Prichard has worked as a broadcaster and teacher, and is now a local government education officer. She and Humphrey Carpenter were married in 1973 and have two daughters.

4. The Oxford Companion to Children's Literature

5. The Oxford Companion to Children's Literature